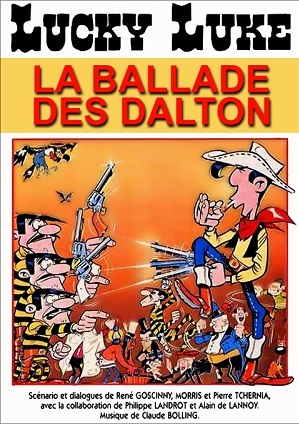 La Ballade des Dalton ("The Ballad of the Daltons") is the second animated film adaptation of the Lucky Luke series, after Daisy Town (1971). The film was released in 1978 by Studios Idéfix, the same company that made The Twelve Tasks of Asterix with a script written by René Goscinny (who wrote the best known Lucky Luke stories), which also explains why the plot is kind of similar. Like its predecessor, it also has a very good animation quality (though due to financial restrictions the film doesn't contain any "animation effects" like the ghosts of The Twelve Tasks). Studios Idéfix was closed down in April 1978 after the death of Goscinny.

The Daltons are informed that their uncle has died. They will inherit his fortune if they murder the judge and all the jury members that sentenced him to the gallows. To make sure that they fulfill this will they will be accompanied by Lucky Luke, seeing that he is the only honest man that he has ever known. If they fail their mission all the money will go to charity.

The people they have to kill are (in order of appearance):

1. Ming Li Foo – A Chinese laundryman. Luke motivates the Daltons to wash their clothes first. While they are in the nude Ming Li Foo flees out of the store. Since they are naked they ask Luke to chase Ming for them. After a martial arts fight sequence Luke is able to get Ming to fake his own death before the Daltons are back.

2. Thadeus Collins – A jail warden, whose entire prison population tunneled out to freedom. The Daltons tunnel into the prison and blow it up, not knowing that the warden had already left using one of the tunnels.

3. Snake Feather – A Native American witch doctor. He gives the Daltons some magic mushrooms, causing them to hallucinate a bizarre dream sequence. When they awake Luke informs them that they have already killed him.

4. Dr. Aldous Smith – A traveling quack doctor whom the Daltons force to drink what they think is poison. It's just the cactus alcohol he's fond off, and he's faking it.

5. Tom O' Connor – An old timer who supposedly disappeared into his gold mine. Luke meets him beforehand and explains the situation. The Daltons search from him in a mine-cart leading to a chase scene that resembles a rollercoaster ride. When they find the old timer, he acts like a ghost and convinces them that he has been dead for some time.

6. Sam Game – A former gambler who saw the light and became a clergyman (even though he still uses and references gambling terms in his sermons). He is killed in a game of Russian roulette, which, of course, turns out to be faked.

7. Bud Bugman – A train driver. The Daltons try to kill him by derailing the train he is riding on to a different direction. Bugman hides in the tender car while his assistant tells the Daltons that he was killed and the body fell off the train during the derailing.

8. Mathias Bones – An undertaker, accompanied by a vulture. The Daltons ambush him by shooting him dead from his carriage (they actually shoot a dummy).

9. Judge Grudy – A judge. The Daltons plan to kill him at the party he holds after a rodeo, but Luke uses a fake newspaper to fool them.