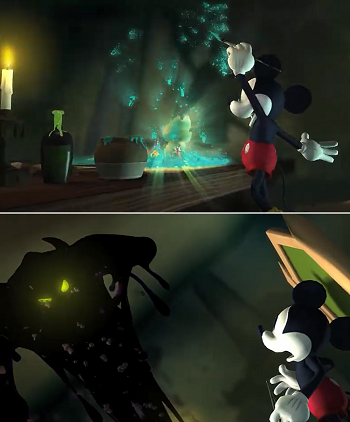 Congratulations, Mickey, you've just created The Blot!
Now just wait until you try to fix your mistake.
"How kind of you to open that lock for me. Every time I wonder if it was wise to let you live, you do something like this and show me you're worth keeping around."
— Thot Trel, Star Trek Online
Advertisement:

...but not so fast! It turns out that by the very act of success, they've unwittingly made things worse. Maybe the now-dead antagonist was actually holding back an even greater evil. Maybe the villain, having been defeated or damaged, is now transformed into a new, ultimate, unstoppable, invincible, angry form, often against the villain's will. Maybe the villain, despite their villainy, was serving some other greater good — keeping the world/universe/nature/whatever politically or literally balanced — and their demise throws things into chaos. Maybe the so-called villain was actually a Hero Antagonist, and you just unwittingly handed a huge victory to the real villain. Maybe that princess you saved is a cold-hearted tyrant at the head of an oppressive regime, or even a Sealed Evil in a Can. Perhaps taking down the villain has resulted in an Evil Power Vacuum, and now even worse guys are fighting to fill the void that the previous villain left, causing even more havoc than that previous villain could have ever dreamed. Or perhaps the only means of foiling the villain involves questionably massive "collateral damage" and is so extreme that the hero is now the worst example of He Who Fights Monsters, My God, What Have I Done?, or Full-Circle Revolution. For whatever reason, the hero's victory over death and destruction directly or indirectly leads to an even greater wave of death and destruction, or something else that puts a Downer Ending spin on everything. Oh dear.

In most cases, of course, the hero will take full responsibility for their actions and be haunted by them, horribly traumatized. Now their new mission is to stop the new danger they've unleashed, preferably in a way that doesn't spawn ever greater menaces. Darker plotlines may end the story right there instead, and it's always possible the villain's demise inadvertently resulted in the irreversible destruction or horrifying mutation of the world. If used excessively, this trope often leaves an audience with a sense that the hero shouldn't have tried to change things for the better and indeed shouldn't have even left home. Can also be a moral about getting seriously involved in things without learning much about them.

This trope is a common problem with the Small Steps Hero. Compare Create Your Own Villain, What the Hell, Hero?, Unwitting Pawn, Must Make Amends, You Already Changed the Past, Two Rights Make a Wrong, Nice Job Fixing It, Villain (but note that villains are also subject to this trope — they can do something careless that screws them over or helps out a worse villain). Compare We Want Our Jerk Back! when the hero/villain makes the villain/hero powerless, only to have it backfire and give them a worse villain/hero/fate than expected, resulting in them wanting things to go back the way they were. Better the Devil You Know is a similar situation, where the utter defeat of one villain can lead to a completely different and greater evil taking over. This trope may lead to a Redemption Quest in an attempt to make up for the mistake. Has very little to do with Nice Job Breaking It, Herod! (in fact, that one usually leads to the biggest cases of the complete opposite Trope.)

It frequently overlaps with No Good Deed Goes Unpunished.

This trope usually involves a plot twist, so beware of unmarked spoilers!