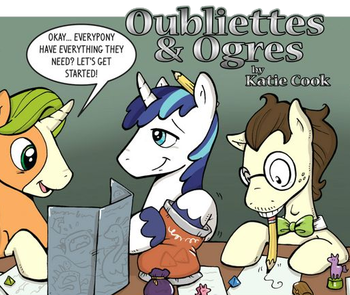 Just a bunch of nerdy-ass ponies sitting around and playing O&O.
Ampersand Law #1. Early RPGs always had names in this format: [Something] & [Something Else That Usually Begins With The Same Letter]. (Dungeons & Dragons, Tunnels & Trolls, Villains & Vigilantes, Chivalry & Sorcery, etc.)
— RPG Cliché List

Any fictional roleplaying game can be recognized as such because it will have a title consisting of two alliterative plural nouns suggestive of its genre separated by an ampersand. A writer in need of a fictitious parallel to Vampire: The Masquerade, for instance, would probably dub it something like "Cloaks & Coffins".note Although, "C&C" is already taken, at least in Real Life. Bonus points if the two nouns are a place name and a monster name.

The Magic Ampersand form serves the same instant-identification purpose for ad hoc roleplaying games that the Chest Insignia does for ad hoc superheroes. It's also frequently used to make jokes about fictional creatures playing a roleplaying game based on our own mundane lives.

A loose exception is allowed for World of Darkness games — while they are, by all means, more hermetic than Dungeons & Dragons, a writer aiming specifically for a World of Darkness joke might just opt for Colon Cancer instead of this trope.

(Note: Pride and Prejudice and Sense and Sensibility are aversions of this trope, being Jane Austen novels.)

Compare The Noun and the Noun and The Titling. Don't confuse with Capital Letters Are Magic, where the letters are used in-universe. Also see Adjective Animal Alehouse for common theme naming of ad hoc places of ebriety, where many such adventures begin.