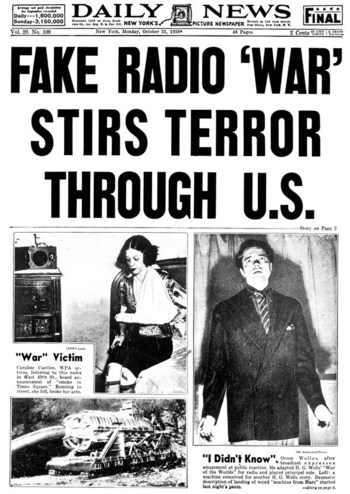 ...but not really.
"Ladies and gentlemen, we interrupt our program of dance music to bring you a special bulletin from the Intercontinental Radio News..."
Advertisement:

The single most (in)famous broadcast in American radio history.

Needing to come up with a Halloween Episode for the October 30, 1938 broadcast of his CBS radio program The Mercury Theatre on the Air, Orson Welles decided to adapt H. G. Wells's classic 1898 novel The War of the Worlds to a contemporary American setting. Rather than presenting a straight radio play like with previous Mercury Theatre broadcasts, for this episode the show started out offering its listeners what was apparently a simple program of live dance music—until, that is, they started breaking in with "news bulletins" about strange explosions on the surface of Mars, followed by reports of a meteorite landing in rural New Jersey...

As the on-air "reporters" breathlessly described large alien tripods emerging from the cylindrical "meteorites" and commencing to destroy the American countryside with heat-rays, many listeners believed that an actual Alien Invasion was taking place, and thus a nationwide panic quickly ensued... or so the Urban Legends have it, at least. Later research indicates there was little to no actual panic, and the anxious reports that ran in the next day's newspapers

has in any case become part of American folklore

The broadcast has been re-created several times:

The incident was dramatized in "The Night America Trembled", a 1957 episode of Westinghouse Studio One, and The Night That Panicked America, a 1975 Made-for-TV Movie co-starring John Ritter; and touched upon in feature films like Woody Allen's Radio Days (1987) and even in cartoons like Bob Clampett's Kitty Kornered (1946) and The Simpsons episode "Treehouse of Horror XVII" (2006). Two episodes of Negativland's weekly KPFA radio happening Over the Edge, helmed by master culture jammer Don Joyce, focused on the program as an example of "How Radio Was Done

information in modern life. It was analyzed in a hysterically funny episode

of NPR's Radiolab in 2008, talking about the power of mass media and humanity's need for storytelling. The historical events and situations that set up this incident are described in PBS' 2013 American Experience episode "The War of the Worlds

". There's more in A. Brad Schwartz's 2015 book Broadcast Hysteria: Orson Welles' War of the Worlds & the Art of Fake News.

This incredibly innovative broadcast is the Trope Maker for Halloween Episode, Deadline News, Phony Newscast, This Just In!, We Are Experiencing Technical Difficulties, and We Interrupt This Program.

Ladies and gentlemen, this page has no further significance than as the educational article it was intended to be; it is TV Tropes' version of dressing up in a sheet and jumping out of a bush and saying, "Boo!" So don't panic!