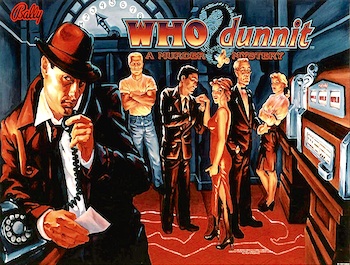 It's time to discover WHO dunnit!
Nick Spade: "And then, I was on the case."

WHO dunnit is a pinball machine designed by Dwight Sullivan and Barry Oursler, with artwork by Linda Doane and Paul Barker. It was released in 1995 by Williams Electronics (under the "Bally" label), and is best remembered for its melding of Pinball with Mystery Fiction, Film Noir, and Interactive Fiction.

The game is set in 1934, and the player is Nick Spade, a Hardboiled Detective who is investigating a series of murders at a hotel and casino. Interrogate various suspects, gather equipment to help your investigation, and search for vital clues. Ride the train around town, search the sewers, then catch a taxi back to Tony's Palace. Use the elevator to explore the different floors of the hotel, then take a break by playing Roulette or the Slot Machine. Discover mysterious notes behind secret passages, watch out for ambushes in the Basement, then get up to the Roof and confront the killer. Play well and you'll get a chance for a Penthouse Party, but only the smartest gumshoes will figure out just how the fates of Tony, Victoria, Butler, Bruno, and Trixie are all intertwined.

WHO dunnit was an attempt to create a pinball game that could simultaneously appeal to casual players and offer a larger challenge and narrative depth for experts. Passersby could simply bat the ball around and enjoy the various gambling minigames, while wizards could play it tactically, such as stretching out a case for more clues (and an extra ball) or quickly solving it for a chance to catch the killer. Players tend to be divided about the game as well; those who enjoy straightforward action are stymied by its measured pace and interruptions to advance the story. Those who take the time to understand the game, however, enjoy it for its intertwined plots, polished atmospheric presentation, and Film Noir charm.

A digital version was formerly available for The Pinball Arcade until the license for the Williams and Bally tables expired on July 1, 2018. Those who purchased it before then can still play it, however.

NOTE: While the game's murders are presented as stand-alone cases, there is an overarching set of Plot Threads that connect the five suspects. Spoilers have been marked where appropriate.

For the television series by the creators of CSI, click here.

WHO dunnit demonstrates the following tropes:

Nick Spade: "Get the phone!"