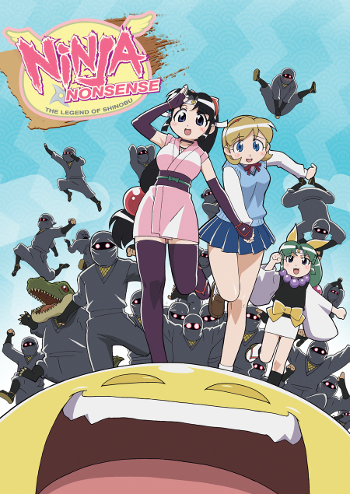 Ninja Nonsense: The Legend of Shinobu, known in Japan as Ninin ga Shinobuden note  (literal translation: 2×2=Shinobu Tale), is a manga series by Ryōichi Koga that ran in Dengeki Daioh from 2002 to 2006. Its story, such as it is, can best be described with that word "Nonsense" in the international title, being one of the purest examples of rapid-fire parody and insanity since Excel Saga.

Despite misgivings, Kaede decides to help the innocent, somewhat ditzy Shinobu to pass her test, and eventually befriends her. Shinobu introduces her to the mysteries of living as a ninja. Mysteries like her classmates, who all resemble the love children of Sho Kosugi and a Jawa. Or their leader, Onsokumaru, who appears to be nothing less than the Walmart happy face after moving to Japan and taking up the role of martial arts master / pervert.

One starts to wonder if the real mystery is how Shinobu remained as innocent as she is, while living in the frat boy atmosphere of the ninja mansion…

The antics only get weirder from there. But, when a series closes not just with ninja, but line-dancing puppet ninja high-kicking in stop motion while their master flies around with panties on his head to a disturbingly catchy banjo riff, you know you're not in for philosophy.

The series got a 12-Episode Anime adaptation in 2004 featuring a cast of some of Japan's most popular voice actors. It was licensed for North America by Nozomi Entertainment*  (in those days simply the undifferentiated licensing arm of anime vendor The Right Stuf International) and given a high-quality comedic dub courtesy of Michael Sinterniklaas's NYAV Post studio. Nozomi continues to hold the home video rights to this day, but broadcast rights have shifted over the years, first to ADV Films' Anime Network and then to Funimation and Hulu. The original manga was briefly licensed and translated into English but cancelled partway through and is long out-of-print.