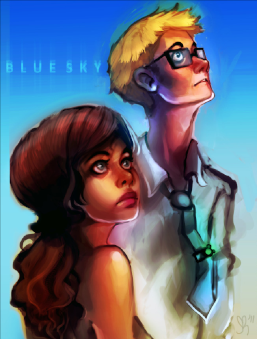 One of many many many pieces of fanart floating around Tumblr. See the Image Page for more.
"Meteors, signals, apologies, and that tricky little thing called humanity- four years after the events of Portal II, Wheatley’s been handed a second chance, but it’s not going to be plain sailing…"
— -Waffles, the Story's author, under each chapter's Tumblr post.
Advertisement:

Blue Sky is a Portal fanfic by Waffles, and is hosted on both LiveJournal and FanFiction.net. A Humanized Wheatley fic, it spans 15 chapters and it's one of the longest Portal fanfictions on FFN, clocking in at 176,808 words.

It's been four years since Wheatley and the Space Core were launched into orbit around the moon. Chell has escaped and is living peacefully in a nearby town, GLaDOS is working on the Cooperative Testing Initiative, and all seems to going, if not well, at least fine. Then the Space Core gets blasted to bits by a passing meteor, knocking Wheatley out of orbit and into a collision course with Earth's surface. After he sends up a distress signal almost by accident, GLaDOS takes notice and decides she might have a use for the metal ball.

What follows is an exploration of Wheatley- his pros and cons, strengths and weaknesses, talents and flaws. It also provides excellent voices for Chell, GLaDOS, and even ATLAS and P-Body.

It can be read on livejournal here

Head to the first link for some beautiful artwork accompanying each chapter. It is complete, and there is a sort of epilogue in the one-shot titled Kick

as well as another (NSFW) one-shot taking place between the story's end and the epilogue titled The Itch.

Check out the Blue Sky image page for lots and lots of fanart. It has two Fanmixes, The Blue Sky Fanmix of Musical Brazillance, and Blue Sky Music Madness. The former was compiled by the author's writing partner, and the latter is made up of fan suggestions. Both are located and available for download here

. It also has its own original fan-written song, From the Monster, With Love,

and a sung version of the in-universe turret song

A character page has finally been made but is currently under construction and in need of assistance.

And for those suffering from the various uncontrollable emotions that this fic is sure to invoke, there is also a Blue Sky Support Group.

Currently, there is a project underway

to convert the nearly 180,000 word story into a fan-produced audiobook, fully-cast and unabridged. The creators began to publish the podfic online, one chapter at a time, on April 5th, 2014, and there was much rejoicing. Chapter One of the podcast has been released

In case you haven't figured it out yet, this fic has a very loyal, very creative fanbase.