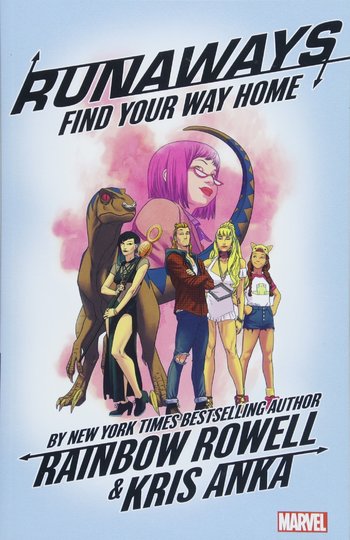 Runaways by Rainbow Rowell and Kris Anka is a 2017 relaunch and Soft Reboot of Brian K. Vaughan's "it" book of the 2000s, released just in time for the hit Hulu series, which this series should not be confused for.

Years after Gert's death, and the Runaways' disbandment, the band gets put back together with the unexpected revival of Gert. Now the Runaways must... run away once again when trouble finds each member, and rediscover what it means to be a family.

Bringing back most of the original cast, and starting the numbering from the beginning, Runaways aims to recapture the magic that the original did last decade, while also creating something new out of it.

The series ran for four years and 38 issues before being suddenly cancelled in late 2021, leaving several plotlines Left Hanging.

The 2017 relaunch provides examples of: