Nexus is simply teeming with life. These are the intelligent ones...who may or may not try to kill and/or eat you.

The Eldan as a group

One of the most technologically advanced races in the galaxy, and the people who started the Dominion (by proxy). They mysteriously disappeared long ago, taking their secrets with them. 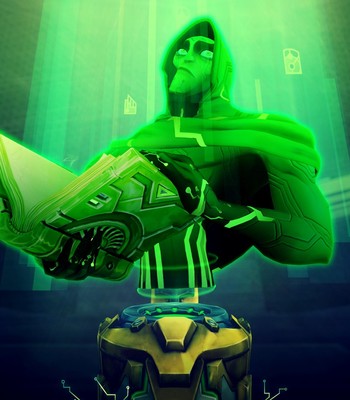 "... Oh my. Are you ready? Then please, step forward into this virtual world to begin. Don't be alarmed: this experience will be EXCRUCIATINGLY PAINFUL!"
Voiced by JB Blanc

Artificial Intelligence. A sentient program left behind to maintain and monitor the Eldan's various experiments, centuries of disuse and the fracturing of his "personality cores" have left the Caretaker helpful...or extremely dangerous, depending on which one you find.

On the one hand, a "green" Caretaker is polite (if sarcastic), helpful, and generally works in the best interest of everyone, i.e. getting the latest Eldan monstrosity under control.

On the other, a "red" Caretaker is sadistic, insane, and just plain mean. He also won't think twice about resurrecting any horrific Eldan experiments left behind, if only to take care of the pesky "organics". (In other words: you.)

Jariel lead the Nexus Project and oversaw each of the six Orders.

Quite possibly the most morally ambiguous to outright evil of the Eldan, Nazrek was responsible for numerous horrors and breaches of protocol on Nexus; such as the necromantic capabilities of the Moodies, the Stemdragons, the Dreg, the Squirg, and a whole host of other nightmares.

The creator of the Skeech, she also had a hand in the creation of the Osun and the Falkrin. She had a constant, well-documented beef with Nazrek, the latter spiting her every chance he gets for his own amusement.

Quite possibly one of the Eldan's most brilliant minds, he was responsible for the Augmentation process, and many other technological wonders on Nexus.

Responsible for most of the security systems and weapons systems on Nexus. Thought very highly of himself.

Head of the Watchers, the security and administration for the Nexus Project. He oversaw the allocation of resources and saw that protocol is followed. Constantly pointed out issues and voiced his concerns over the various projects of the Eldan, but was ignored.

Belonged to the Order of the Shapers, and was among the more moral members of the Project. His wary and conservative views had not made him popular with his colleagues.
Aviel

An Eldan who is part of the Order of the Weavers, the Weavers were responsible for matters involving the Primal Powers, developing technology and techniques specifically for harnessing and manipulating the energies. She oversaw many experiments to infuse primal energy into various forms, as well as to teach the primitive races created by the Progenitors to evoke primal energies on their own. She believed noticeably in the superiority of females over males.
Bathior

Bathoir was aligned with the Order of the Evokers. He believed strongly in the superiority of his own Order over all others.

Nuriam was part of the Order of the Progenitors, a group of Eldan in charge of creating new life on Nexus. She was one of the six chosen by the Eldan to become a Primeval, a powerful being infused with massive amounts of elemental energy. Though they were originally steps towards the completion of the Nexus Project, the natives of Nexus revere and fear them as gods and goddesses. In her case she became Vitara, Primeval of Life. She was Ohmna's mentor and friend.
Yuria

Yuria was one of the Evokers. The Evokers seem to have shared some responsibilities with the Weavers in studying and manipulating Primal Energy in creating new energy, such as the Elementals that wander Nexus. She was one of the six chosen by the Eldan to become a Primeval. Though they were originally steps towards the completion of the Nexus Project, the natives of Nexus revere and fear them as gods and goddesses. In her case she became Hydris, Primeval of Water.
Drusera 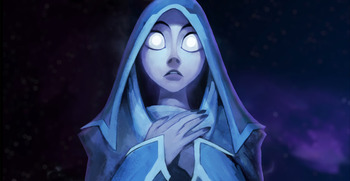 A mysterious woman who appears as a beautiful ghostly figure. She seems to have a rather vested interest in the fight against the Strain.

Winged humanoids with avian features. Proud, barbaric, and extremely territorial, they defend their cliff-side homes with sound and fury.

Necromantic primates. Known for their large, decorative masks that all but obscure most of their body.

"The most Metal species in Wild Star", they are gigantic warriors of living metal. Skilled smiths and beast tamers, they are extremely dangerous foes.

Creatures who worship elemental powers. Notable for being able to incorporate Eldan technology to serve "the Masters".

Found in Galeras. Worship the Storm and their "god" Stormtalon, a massive dragon-like beast born from the God Incubator.

Found in Whitevale. They worship Hydris, the Primeval of Water. Unlike some of their cousins, they are a peaceful tribe, content to fish and collect rainwater.

Found in Ellevar. They worship Hydris, the Primeval of Water.

A cannibalistic, simple-minded, and violent species of blue, gremlin-like creatures. Make surprisingly good chefs, as noted by their victims before they perished from the cooking process.

Tresayne Toria, her fellow Cassian swordmaidens, and their descendants; now the immortal servants of Vitara.

The Strain and the Entity 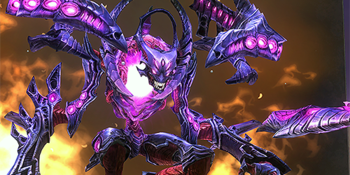 A strange, mutagenic lifeform with the ability to assimilate other life (and in the case of highly powerful Strain known as the Skurge, the landscape) into a monstrous Hive Mind loyal to the Entity, an ancient enemy of the Eldan. The Strain regards itself as the perfect form of life, and regards it as a moral duty to share that perfection with all other life. Through force, if necessary.