The Exiles and the Dominion aren't the only ones interested in Nexus. From interstellar corporations and criminal organizations to regular old spacefarers, these people are looking to make a buck or simply start a new life.

C.o.G.S., or the Coalition of Galactic Scientists, is an organisation that focuses its attention on research that would benefit everyone in the universe. The members include races from both the Exiles and the Dominion, which would be jarring to those who aren't familiar with C.o.G.S. In-game, they serve as caretakers of Sim Cores in both Exiles and Dominion territories.

Should you ever want or need for pretty much anything, Protostar will sell it. Just expect to buy it at the "right, imperceptibly inflated price", and with a few strings attached...

Founder and CEO of Protostar, he takes the saying, "If you want the job done right, do it yourself" to its logical extreme by staffing his company with clones of himself.

Blue-skinned, feline bipedal aliens, Ekose make their living among the stars, hauling cargo to and fro.

A contingency of Protostar robotic laborers, reprogrammed with free will. Although they generally choose to retain their original programmed purpose, they now do so out of choice.

Diminutive treasure-hunters who resemble bipedal, three-foot-tall, rabbit-like creatures. They are biologically obsessed with "shinies", precious metals or anything that glows in the sun.

A famous Lopp hero, he's a prime example of Frontier Justice, dealing death and punishment to those who dare threaten his people.

A cult of augmented beings, obsessed with turning all beings of Nexus into cybernetic monstrosities so they may see "the Truth". They see being turned into Eldan cyborg as merely a means to reach their ultimate goal: joining the Eldan on the Ascend to a Higher Plane of Existence they think them to have ascended to.

A powerful and well-organized crime syndicate, driven by brutality, wealth, and power, plus all the lastest and greatest fashion trends. Known for extortion, intimidation, and violence in style. They are composed of humans, as well as Krogg — giant, hulking, reptilian aliens.

A race of amphibious, highly technologically advanced aliens hailing from Ikthia. They were just like any other modern race, doing good for themselves but unable to really become a superpower in the galaxy, until they discovered how to harness the incredibly volatile energy of Primal Water. Their technology nearly unparalleled in raw potential and energy, the Ikthians have begun a cruel campaign of destruction and experimentation to further their "supremacy".

Descended from Merchant Crews who fought in the Trader's War, Marauders are bloodthirsty spacefaring pirates, a menace to freight captains and —really — anyone with a ship. They're composed of the Oghra, the Eeklu, and the Grund.

"Sure, come to Nexus, they said. A Marauder's paradise, they said. Towns and villages ripe for raidin' and lootin' and pillagin'. For a simple hardworkin' scallywag like meself, it sounded like the perfect place to buckle down and do me bloody business. So, where be the problem, ye might ask? The whole planet's crawling with psychopathic killers! Uhh!"

A Marauder who hosts the "Classes" Flick. He went to Nexus thinking it would be easy pickings, only to suffer at the hands of each class in Wild Star.—- 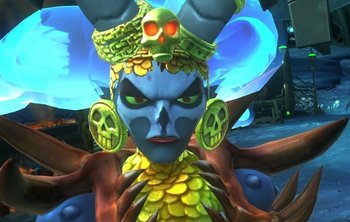 Laveka as how she appears in Redmoon Terror.
Voiced by Courtenay Taylor

A Draken. A bloodshaman in Deradunenote and Celestion for Exiles, who holds a keen interest in the blasphemous Moodies and their dark magics of necromancy.

A little girl whose blood provided the surviving Cassians with a vaccine from the plague after the initial landing on Cassus. In the Shade's Eve (Halloween) event, she was awoken after she sensed the return of Jack Shade.

The main antagonist for Shade's Eve event. Unlike the Angel, he is the spirit that personified the dreadful nature of The Plague from the progenitor of the plague carrier rather than an avatar of him.

The Mayor of Quiet Downs, a Town with a Dark Secret for Shade's Eve
Hoverboard Z-Prix Characters

Galian “Doc” Zemmet is the inventor of Hoverboard, founder of Zem Tech, and host of the Z-Prix Event.
Residential Renovation Characters

Sara Conavius, also known as Genesis Prime of Home Improvement, is the host of the show "Residential Renovation" who is also hosting “Neighborhoods of Nexus” that serve as introduction to the game's Community update.