open/close all folders
The Dominion as a group
"How about 1600 years ago, the humans of planet Cassus were chosen by the Eldan to establish a star-spanning empire. And since that time through intimidation, political intrigue—and a score of impressive military conquests!—the Dominion now exists as a shining example of strength and leadership... for the rest of the pathetic vermin that infest the galaxy."

The largest interstellar empire in the known galaxy. With the fierce Draken in their armies, the Mechari's guidance, maintenance, and occasional intervention, the Chua's sheer brilliance, and the leadership of the Cassians, they are a tyrannical empire and a massive force to be reckoned with.

"The Draken! Savage warriors, fearless in the field of battle! Not exactly the most refined chaps... but I wouldn't say that to their face."

"Forged in the fires of Mikros," an extremely unfriendly, hostile planet brimming with deadly predators and lethal environmental hazards, the Draken are extremely tough with highly honed predatory instincts and hunting skills- and a culture that prides itself on battle, blood, and honour, following the strict code of the Blood Covenants.

The Dominion sent ships to Mikros some thousands of years after the Eldan made themselves known on Cassus, desiring hot blood to fill out the ranks of Dominion troops. Azrion, champion of the Dominion and Dominus' son, challenged the Draken High Clanlord Zhur to one-on-one combat, with the stakes being the entirety of the Draken population. He slew Zhur in single combat, and since then the Draken have served the Dominion fiercely.

Most Draken serve the empire as soldiers, but quite a few of them can be seen doing manual labour, and some Draken scientists have been seen.

"Mechari. Advanced robots engineered by the Eldan themselves! Deadly assassins and super agents! A sense of humour? A bit lacking, I'm afraid..."

Engineered by the Eldan to have all of the advantages of organics without the inherent frailness and limitations of their bodies, Mechari acted as servants for their creators, carrying out their will without question. Strangely, not even the Mechari knew their masters past a voice in their intercoms, their ways as much a mystery to them as to everyone else in the galaxy. It's safe to say the Eldan's mysterious disappearance did not sit well with them.

They have a variety of careers in the Dominion, ranging from ambassadors, to spies, to manual labor, such as the inevitable Manfred to the Rich in Dollars, Poor in Sense Highborn Cassians.

"Lastly there are the Cassians—my people? Without whose continued courageousness, ambition, and stalwart leadership, the Dominion would undoubtedly crumble."

1600 years ago, the humans of planet Cassus were chosen by the Eldan to establish a star spanning empire. Christening themselves the Cassians, they form the majority of the Dominion.

Highborn Cassians are related to the Luminai, however distantly, and therefore have Eldan blood in their veins. They are the aristocrats of the Dominion, their privileges coming from service to a Luminai House. They speak with posh British accents and are generally portrayed as sophisticated and elegant, above trivial things.

Lowborn Cassians are those who are not related to the Luminai, and are just plain old Cassians. They are the lower-middle class of society, and form most of the population. They speak with Cockney accents and are generally portrayed as simple, hard-working, Eldan-fearing folk. Most Exile Humans descended from Lowborns.

Half-jokingly, telling the difference between Lowborns and Highborns is as simple as checking out their bank account, and determining who gets into the VIP areas with ease and who doesn't.

"The Chua... nasty little rodents, they are. Of course you can't deny the buggers are brilliant at what they do; if it can be built and it needs to hurt people the Chua are the ones for the job! And it's just unfortunate that the furry little fiends are certifiable psychopaths..."

Originally a primitive race of the forest world Bezgelor, the Chua were uplifted by the Mechari after noting that the species possessed an incredible talent for mechanical engineering as well as having a devious and competitive nature. In under a century, the Chua then proceeded to carpet their planet with factories, devastating it via overindustrialization. With no further resources for their experiments, the Chua joined the Dominion as scientists in seek of new worlds to wreak havoc on.

Non-playable race. Cassian/Eldan hybrids, they are the bluebloods of Dominion society. 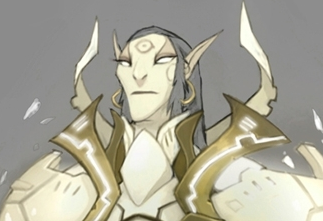 "I speak to you as both Luminai and Emperor."

Luminai. Present Emperor of the Dominion. Spearheaded the Dominion's push to Nexus. Has a striking resemblance to his ancestor Dominus, the first emperor and Luminai, which gave him the title "Dominus Reborn."

Luminai. The first of his kind, half-Cassian, half-Eldan, his majesty ushered in a golden age for the Dominion, using the knowledge and technology the Eldan had granted him to bring the Empire to then unthought-of heights. Has become something of a religious icon for the Vigilant Church, as a Messiah figure.

Luminai. The emperor who bested High Clanlord Zhur in one-on-one combat, winning the eternal loyalty of the Draken.

Luminai. AKA the Mad Emperor, Vorios had driven the Dominion down a very dark path, causing unparalleled damage to the economy and the people, staffing his inner circle with the most decadent and corrupt pigs he could find. 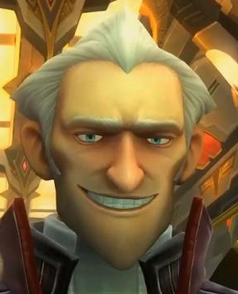 "Hello there. It appears it has fallen to me to tell you about the Dominion. And as your luck would have it, I am by far the most qualified individual to do so! Shall we begin?"

Draken. Ruler of the Bloodfire Tribe in Deradune.

The Dominion's answer to the ever-present need for newer, better, and more lethal technology. As likely to blow the empire to hell as their enemies, DRED is looked upon with caution and no small measure of disdain.

"DRED not finished with you yet... you're still alive."

Chua. Though Chua have no formal leadership, he is considered his species head-honcho by virtue of being the most brilliant, sadistic, and insane of his kind.

Legions as a group

No empire is without it's military. These are the officers and brave soldiers of the Dominion.

Not to be confused with the Torine Swordmaidens on Nexus, the Cassus Order of the Swordmaidens are an elite fighting force of all-female soldiers, trained in highly advanced sword-fighting techniques alongside the military tactics of the the rest of the Legions, bolstered by a strong sense of duty and honour, exemplified by the fact that there is no leaving the Order but death.

Presently they are staying in the Cassus/Dominion Capital of Meridia. Whether or not they will join the Dominion on Nexus remains to be seen, as with the political and social effects of meeting up with their Torine counterparts.

"Unleash the engines of slaughter!"

Draken. The head of the Dominion military, what passes now as the Draken High Clan Lord. 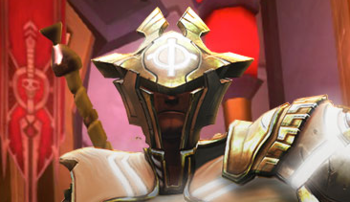 "There is no greater service than service to the church."

An Empire cannot expand without new territory. It is the Exploration Societies job to venture into the unknown, extending the Dominion's domain and bringing back any treasures they might find.

"Rest assured, I'm sure meeting me in person can be an overwhelming experience."

Cassian, Highborn. The explorer of the Dominion, who hosts a high-impact, action-packed reality show where she films her dangerous adventures. With a reckless disregard for safety, courtesy, and common sense, one has to wonder if it's sheer luck or skill that's been keeping her alive...

She is oftentimes accompanied by her Draken bodyguard/mentor/friend, Kevo, who is almost the complete polar opposite of her in sensibility, practicality, and daring do.

"The Little Miss burns with the fire of House Zin."

Draken. Artemis Zin's personal bodyguard, and mentor. Foil to his mistress, he is cautious and oftentimes expresses extreme exasperation at the Little Miss's antics.

The Empire's eyes and ears, the agents ensure the smooth operation of the Dominion from the shadows. The foil to the Exiles' Black Hoods.

The ICI as a group
Pheydra

"Oh I know where you've been, what you've done... does that make you nervous?"

Mechari. The founder of the ICI and its head, and one of the oldest sentient beings in the universe.

Mechari. Known for hosting a rather infamous class on "Paths," a person's specialization and responsibilities once on Nexus.

Inevitably, a religion rose from the arrival of the Eldan, venerating them as benevolent gods.

The Vigilant Church as a group
Varonia Cazalon

"By the gods, listen up and listen well! This is important!"

"Are you ready to spill blood for the empire?"

Draken. The deadliest huntress of Clan Bloodfire. In charge of determining whether or not you are fit to participate in the Great Hunt.

"This would be a lot easier if you didn't feel the insatiable need to sprint everywhere!"

Cassian, Lowborn. An oftentimes drunk, overconfident, and selfish ass, he is still one of the galaxy's most effective freelance trackers, once having found the Star of Dominus, a precious jewel stolen by marauders, all by his lonesome.