The mother of Anafiel Delaunay.

"All knowledge is worth having."

Phèdre's mentor. Delaunay is a nobleman with a mysterious past and an important mission. He adopts Phèdre into his household, trains her, and uses her to spy on his enemies. Eventually it is revealed that Delaunay was once the consort of long-dead Prince Rolande. He swore a vow to protect Rolande's daughter Ysandre, the Dauphine. His choice to honor this vow leads to his death at the hands of Isidore d'Aiglemort's men, who botched their orders to watch him.

Alcuin is Delaunay's other pupil, who, like Phèdre, he teaches to listen and observe and uses him to spy on his enemies. But unlike Phèdre, Alcuin hates working as a courtesan and does it all out of love for Delaunay. He and Delaunay become a couple once Alcuin has made his marque. 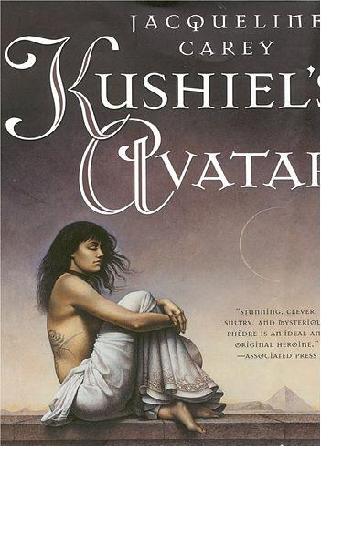 "That which yields is not always weak."

The heroine and narrator of the first three books, her most distinguishing feature is a scarlet mote in her left eye. Phèdre is sold into indentured servitude as a child and her bond is eventually purchased by Anafiel Delaunay. Delaunay recognizes what the scarlet mote in her eye means: Phèdre is an anguissette, one who is cursed to experience pain and pleasure as one. He teaches her how to listen and observe as well as the "arts of the bedchamber." Phèdre frequently uses her skills as both courtesan and spy to save Terre d'Ange from various deadly plots.

"In Cassiel's name, I protect and serve."

Joscelin is a member of the Cassiline Brotherhood, a celibate order of warrior-priests, who is hired by Delaunay to protect Phèdre on her assignations. At first Joscelin is very prudish and uptight, but he gradually relaxes. He and Phèdre dislike each other initially, but they eventually fall in love. He is one of the most skilled and dangerous warriors in the series.