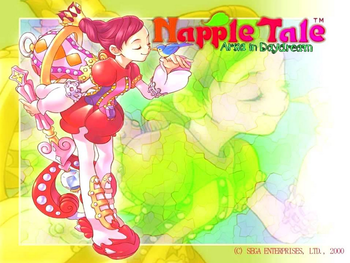 A game whose soundtrack is pretty much the only part anyone knows. It's understandable; the soundtrack by the masterful Yoko Kanno is amply worth listening to on its own, while the game, released on the ill-fated Sega Dreamcast in 2000, never left Japan.
Advertisement:

Its full title is Napple Tale: Arsia in Daydream — at least, that's what it says in English on the cover — and it does, in fact, have a Dream Land-y, Lewis Carroll sort of a feel. The heroine, Arsia Poach (a name that confounds everyone who's written about this game outside of Japan,) is an ordinary student who has a figurative rabbit hole open under her while attending her town's summer festival. In a case of Mistaken Identity, she is accidentally grim-reaped by a bumbling rookie "Spirit Guide" and taken to Napple World, a realm that lies in the boundary between the Real World and the Deep Dream (a.k.a. the afterlife).

No sooner does Poach arrive in Napple World than she loses her "petals", six spirits that allowed her to exist in the real world. She's stuck in Napple World without them, so she goes on a quest to get them back and go home. Her petals escaped into the four seasons that lie beyond the charmingly quirky haven of Napple Town, and to make matters worse, the seasons have been in a state of chaos lately, swarming with monsters. So Straynap, the Spirit Guide who got her in this mess, volunteers to put Poach up in his ice cream shop in Napple Town, and lend her his wisdom to navigate the wilderness. (Which is worth more than it looks.)