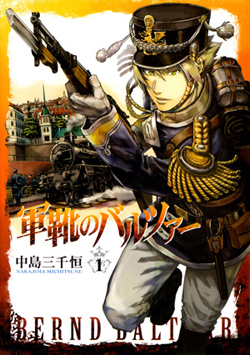 Gunka no Baltzar (Baltzar Militarismus) is a military seinen manga by Nakajima Michitsune, telling the story of a military officer's life in a world of wars, politics and military reform.

Gunka is set in an alternate world resembling mid-late 19th century Europe. Major Bernd Baltzar of Weissen—a regional military power—is a rising star due to his performance in a recent war; his career takes a surprising turn when he is reassigned as an adviser and military academy instructor to the newly-allied state of Baselland.

But Baselland's army is out of shape for modern war and its citizenry are anti-militaristic. Baltzar has to deal with the military's conservatism in order to make Baselland into a worthy partner in its alliance with Weissen. Other events seek to compound Baltzar's troubles internally in Baselland, and externally in Weissen's relations with the other major powers on the continent…

A side story titled Yuukoku no Liebknecht is being produced, focusing on the character Rudolph von Liebknecht.

Gunka No Baltzar provides examples of: