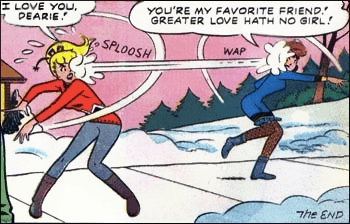 "A very good measure of how good your friends are is how much you can insult them without them taking offense."
— Heliomance
Advertisement:

When two people who bicker and argue constantly are still the very best of friends.

Many true friends are openly warm and affectionate with each other, keeping a united front in public and having their arguments in private. Such friendships are not this trope.

These guys bicker constantly. They're always sniping at each other. They snark relentlessly. They duke it out on equal terms, hurling insults at one another with prejudice, maybe ever since they were little kids. But underneath the verbal fencing is a rock-solid friendship that no Smug Snake, Manipulative Bastard, or Hate Plague could hope to chip at. A Friend in Need may be needed to make this manifest. Often, they have opposite morals, personalities, or fighting ability which is presumably the cause of the vitriol, since they see in each other the kind of flaws they just can't stand to ignore (or maybe it's just because they're both Deadpan Snarkers). Such characters may go for a Friends All Along fight if one is introduced before the other.

This trope can often serve as a warning that something may be wrong as well. When one of the Vitriolic Best Buds suddenly stops responding to insults or flinging barbs of their own, the other may pick up on the sudden change in behavior as a sign that something is not right.

Woe betide any outsider to this unusual 'friendship' who thinks that because one is constantly snarking on the other, it gives the outsider the right to make snide comments about the other as well; usually, they will quickly (and painfully) learn that "no one makes fun of him/her but me." This is more a given when the vitriol is mutual between both friends, but in the variation where only one is vitriolic it may be a Pet the Dog moment or proof that aw, look: They really do like each other!

Compare Aw, Look! They Really Do Love Each Other, Belligerent Sexual Tension, Friendly Rivalry, With Friends Like These.... Contrast with Headbutting Heroes (who just cold-out despise each other despite being the best of heroes), Teeth-Clenched Teamwork (where the relationship between teammates is genuinely strained) and Friendly Enemy (where two people who are on separate sides of a conflict aren't all that hostile to one another). Some types of Villainous Friendship have a similar dynamic. Inverted Trope of Overly Polite Pals.

NOTE: Due to a rewrite of this page, many examples will still refer to previous "type one and type two" dynamics. "Type two" is the version of the trope described above, while "type one" is a variation in which only one friend is vitriolic while the other friend is completely oblivious to the vitriol and much, much friendlier. If you come across such an example elsewhere on the wiki, please correct it to be clear without the type label.

While visiting Our Town to learn why the Map Table sent them there, the six get into a disagreement of why they are here in the first place or what they are supposed to do.

While visiting Our Town to learn why the Map Table sent them there, the six get into a disagreement of why they are here in the first place or what they are supposed to do.