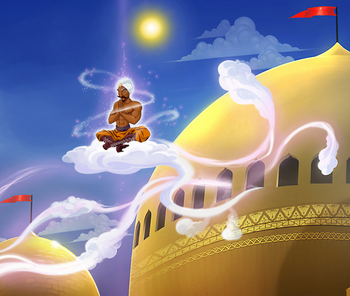 India is a mystical place with fakirs, rajahs, turbans, snake charmers (and other slightly demented street performers), the Ganges and Gandhi. It's also full of temples overgrown with humid jungle and occasionally home to an evil cult, elephants and tigers. Snakes are everywhere, so it's a good idea to have a cute and heroic mongoose with you to take them on.

At least, that's what fiction tells us. Often, this trope goes hand-in-hand with a case of Mistaken Nationality and Interchangeable Asian Cultures, as India for some reason suddenly takes on Arab and Persian characteristics in some American films. In some older Hollywood movies, it's not uncommon to see Aladdin and Geniesnote Silly, of course, since everyone knows that Aladdin was actually set in China. tossed together with Hindu deities. To be fair, this is Truth in Television to an extent as India has a large Muslim population (13.4%, according to The Other Wiki) and was ruled by Islamic kingdoms for century-spanning portions of its history, such as the Mughal Empirenote And parts of what used to be considered part of India went on to form the nations of Pakistan and Bangladesh, which both have majority Muslim populations so it's certainly been more influenced by the Middle East than most Western countries have been. Also, the languages of northern India are mostly Indo-Aryan, making them distantly related to Persian and — even more distantly — to English (That's where the term "Indo-European" languages comes from of which Indo-Aryan is a subset just like Germanic).

Becoming a bit of a Discredited Trope these days, at least in Europe and North America, where there have been significant pushes for more accurate portrayals of foreign cultures, and a notable percentage of the population can and will call works set in India out on any inaccuracies. Of course, even Bollywood itself would release several films set in the Mughal Empire, leading to further confusion to an already confusing mix.

The phrase "Sim sim salabim" itself is an old stock magician's phrase like abracadabra or hocus pocus, and originally derived from Scatting within a Danish or German (whichever came first) children's song titled Højt på en gren en krage (sad), "High on a branch a crow (sat)", or Auf einem Baum ein Kuckuck (saß), "Upon a tree a cuckoo (sat)". Either way, the original phrase in the song is Sim salabim bumba saladu saladim.

See Stereotypical South Asian English, and Countrystan, which is Fictional Country north and west of India, with a similar Muslim influence with a touch of Ruritania.

Perfectly normal guy in a turban meditating on a cloud.

Perfectly normal guy in a turban meditating on a cloud.