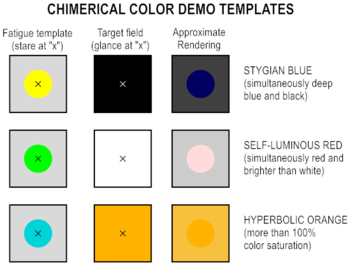 Stare at the fatigue template for about a minute, then glance at the target field, and you might be able to see unique colors.
It was octarine, the colour of magic. It was alive and glowing and vibrant and it was the undisputed pigment of the imagination, because wherever it appeared it was a sign that mere matter was a servant of the powers of the magical mind. It was enchantment itself. But Rincewind always thought it looked a sort of greenish-purple.
— Discworld
Advertisement:

The Fictional Colour is a color described in a work of fiction that doesn't exist in Real Life, and would be impossible to create or obtain.

The Fictional Colour is usually found in Speculative Fiction. It may indicate the presence or influence of magic, such as when a Magical Sensory Effect is in play. Sometimes it can only be seen by certain species or types of people. When not associated with magic, it's used to give some sort of descriptor to concepts that cannot be expressed by actual colors visible to the human eye, especially when it comes to energy. For example, any sort of infrared or ultraviolet vision changes things to a form we can comprehend, and works like The Incredible Hulk have caused gamma energy to be associated with green.

In any event, it is almost always confined to non-visual forms of storytelling, for obvious reasons. If we actually saw it, well, it wouldn't be fictional. Visual works may incorporate this either by just having other characters describe the colors or removing all color from the work so you can just assume that shade of grey is a color you've never seen before.

Strangely enough, attempts to describe the Fictional Color will often result in prose that is very much purple.

The Parody Sue sometimes has eyes of this color.