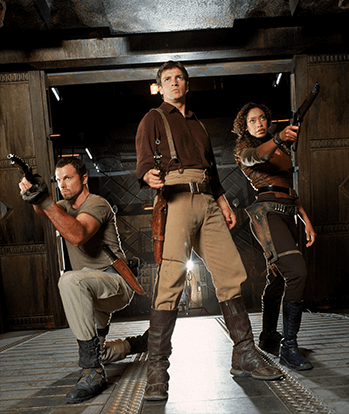 Mal: Well, look at this! Appears we got here just in the nick of time. What does that make us?
Zoe: Big damn heroes, sir!
Mal: Ain't we just.
— Firefly, "Safe

Any time the heroes/anti heroes get to save the day in a big, awesome manner.

For instance, say that the poor Damsel in Distress is looking her fate dead in the face, and is seemingly resigned to it, because it seems that Nothing Can Save Us Now… and then, boom! The heroes kick down the door and proceed to stomp the bad guys into the ground. Just in Time.

A Ragtag Bunch of Misfits will often have a Misfit Mobilization Moment before becoming the Big Damn Heroes. If they were busy with something else, but saw the crisis and dropped whatever they were doing in order to save the day, it's a case of Dudley Do-Right Stops to Help.

Note that a Big Damn Heroes moment doesn't have to succeed. They can fail to save the day, or even make things worse. These are all straight versions of the trope.

If the heroes just finished a training arc and show off new powers, it's Look What I Can Do Now!.

A Super-Trope to Roaring Rampage of Rescue. The King in the Mountain always has a legend of becoming this.

A Sister Trope to Gunship Rescue, I Got You Covered, Horseback Heroism, Just in Time, or even Changed My Mind, Kid.

Compare The Cavalry (it's the heroes saved in the nick of time), Contrived Coincidence, Bad Guys Do the Dirty Work (otherwise known as Big Damn Villains), Villainous Rescue (when the villains are like this trope) and "Hell, Yes!" Moment.

Contrast You Are Too Late, Nice Job Breaking It, Hero, The Cavalry Arrives Late.

Elsa And Seals To The Rescue

Elsa and some seals save Honey and Chief from droning.

Elsa And Seals To The Rescue

Elsa and some seals save Honey and Chief from droning.