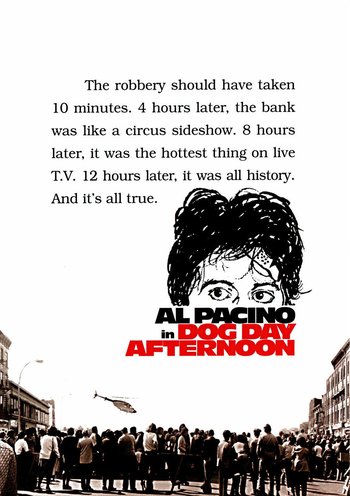 Dog Day Afternoon is a 1975 crime drama film directed by Sidney Lumet, starring Al Pacino, John Cazale, and Charles Durning. It's based on a Real Life incident from August 1972.

On the hottest day of the year, three men in Brooklyn decide to hold up a bank. The plan is simple: They're going to run in, steal the latest shipment of money, and leave. It'll be over quickly, and the robbers will go home with a big stash of money that mastermind Sonny Wortzik (Pacino) can use to help with his wife's medical bills.

Except, that's not what happens. Thanks to pure, bullheaded incompetence, the robbers quickly find themselves down to two men with barely any money to steal and a building full of hostages, with the police and the media converging outside. All this, and there's no air conditioning in the bank. As the hours pass, the robbery becomes a news sensation, the crowds of onlookers grow bigger and bigger, and the story gets crazier and crazier. It's no longer a question of whether Sonny and Sal Naturile (Cazale) will escape with the loot, but whether they'll escape at all. And that's only the beginning of their problems...

A classic of the New Hollywood era, Dog Day Afternoon covers a wide variety of themes, from ideas about gender and personality, to Stockholm and Lima syndromes, to the influence of the media on the events it covers. Winner of the Academy Award for Best Original Screenplay (by Frank Pierson), and nominated for five others including Best Picture. Not to be confused with the 2011 Heroic Fantasy Anime called Dog Days. For a Race Lift remake starring Denzel Washington, see John Q.