Characters / Ever After High Family

The students' parents, who have already lived out their fairy tales.

open/close all folders
The Evil Queen and the Good King

Raven Queen's parents. The former is presently trapped in a magic mirror for her crimes against the world of Ever After.

Snow White and her King 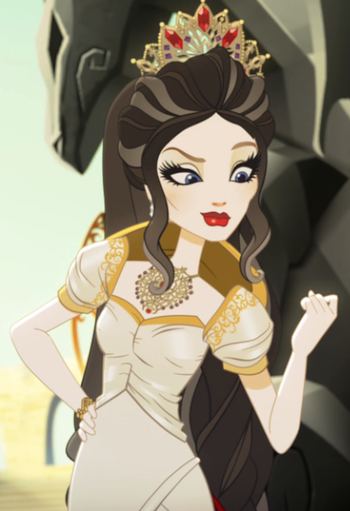 Apple White's parents, and current monarchs of their kingdoms.

Cerise Hood's parents. Contrary to the original story, the Big Bad Wolf was neither killed nor chased away, and changed his mind about what exactly he wanted to do to Red Riding Hood.

The Charming Family (Daring, Dexter, and Darling's)
Daring and Dexter's parents, grandparents, and extended family. They have a long history of being traditional generic princes and princesses who fill roles in stories that don't have a specific lineage attached to them.
The Cheshire Cat
Kitty's mother, who is still in Wonderland. She appears in Spring Unsprung.
The Queen of Hearts
Lizzie Heart's mother and co-rulernote sole ruler as of now of Wonderland. Due to The Evil Queen it's said she is more crazy than ever before.

The Mad Hatter
Maddie's father and owner of the Wonderland Haberdashery and Tea Shoppe.