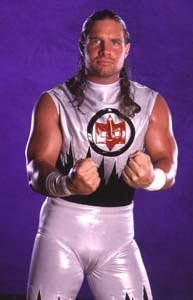 Michael Bucci, (born June 5, 1972 in Tom's River, New Jersey), is a semi-retired American professional wrestler best known for his work in ECW from 1996-2001 as Super Nova and, later, as Nova. He started out with a Superhero gimmick, but shed it in late 1998-early 1999 after his tag team partner The Blue Meanie left for WWE. He made his PPV in-ring debut at ECW Wrestlepalooza 98, teaming with the Meanie in a win over the Full-Blooded Italians (Tracy Smothers and Little Guido Maritato, w/Tommy Rich). After ECW died, he bounced around the indies for a year before arriving in WWE's developmental promotion Ohio Valley Wrestling. On May 15, 2002, he defeated The Prototype (John Cena) for the OVW Heavyweight Title

with Aaron Stevens. He also had a run as the booker for OVW. He got called up to Raw in mid-2004 under a new gimmick of an evil informercial fitness guru named Simon Dean. He mostly jobbed a lot in this gimmick, including being the first TV victim for both the Boogeyman AND for Bobby Lashley. He later had an offscreen run as the head of WWE's developmental program in OVW, which, he claims, soured him on the business.

Not to be confused with Supernova or the various possible examples for Nova.