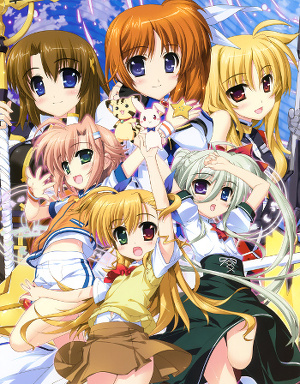 "This is a tale of the only daughter of the former Ace of the Sky, Takamachi Nanoha; a fourth elementary grade student of the St. Hilde Academy of Magic... A vivid tale of Takamachi Vivio."
Advertisement:

Magical Girl Lyrical Nanoha ViVid is the fourth entry into the main Nanoha continuity and the first to debut as a manga instead of an original anime. The manga ran in Comp Ace from 2009 to 2017, at a total of 102 chapters and 20 manga volumes.

While it's set four years after Magical Girl Lyrical Nanoha StrikerS and one year after StrikerS Sound Stage X, ViVid is actually more a Spin-Off than a true sequel. It features Nanoha's and Fate's adopted daughter Vivio (first introduced in StrikerS) as a Magical Girl Warrior who turns into her teenage form when she needs to battle with the power of Sacred Heart — her... bunny plushie Device. That's right, it's a return to more traditional Magical Girl fare, complete with a rival Magical Girl in the form of Hegemon Ingvalt, a king from the era of Ancient Belka similar to Vivio. It also has many recurring characters from StrikerS, including the reformed Numbers cyborgs.

The series is a lot Lighter and Softer than the standard incarnation of Nanoha and lacks a major antagonist and an over-arcing plot. However, it's by no means less action-packed, as it focuses heavily on magical martial arts and feels much like a shonen series with magical girls.

A twelve-episode anime adaptation aired on TOKYO MX in Spring 2015, covering the first approximately 31 chapters, while the spinoff series ViVid Strike! aired in Fall 2016, pushing Vivio to a side role in favor of newcomer Fuka Reventon.