Delicate and Sickly
aka: Ill Girl 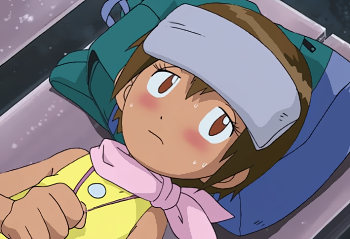 Gives new meaning to the phrase "sickeningly cute".
"When they met she was fifteen
Like a black rose blooming wild
And she already knew she was gonna die."
— Love You To Death, by Kamelot
Advertisement:

A character who is delicate and sickly is almost inevitably a sympathetically cute girl.note Though lately, more and more handsome males are taking up the role. The disease can be anything from non-terminal but debilitating conditions like anemia to invariably-fatal issues like organ failure. Smart writers avoid such specifics, making it a Soap Opera Disease. It will never disfigure or impair her cuteness.

If the condition is terminal, a common cliche is that the dying character is trying to hold on until some distant, significant day has arrived. For example, she might be lying sick in autumn, noticing leaves falling off a tree by the window, and hoping she will live long enough to see the last one fall. You can see this one subverted in the O. Henry story "The Last Leaf."

This character type is probably indirectly descended from the Western romantic "consumptive heroine" (The classic 19th-century example would be the heroine of La dame aux camélias, source material for La Traviata and Camille (1936), while Nicole Kidman's "Satine" in the film Moulin Rouge! is a contemporary example). She may suffer from what Roger Ebert called Ali McGraw's Disease (after Love Story): "Movie illness in which only symptom is that the sufferer grows more beautiful as death approaches."

Becoming this character is a common side-effect of Victorian Novel Disease. Only occasionally related to Definitely Just a Cold. See also Littlest Cancer Patient, Bandage Babe, Too Good for This Sinful Earth, Incurable Cough of Death, Utsuge, Soap Opera Disease, and Marked to Die. Sickly Child Grew Up Strong occurs when a heroic or powerful character is shown to have been this in their youth. They may be seen with an Illness Blanket.

For the equestrian equivalent, see The Alleged Steed.