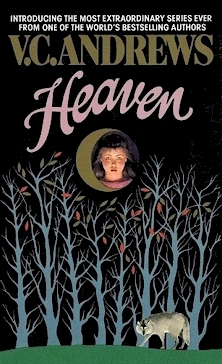 Deep in Her Heart, Heaven Dreamed.... note Cover of the first US edition, by Milton Charles and Lisa Falkenstern
My own name was both a blessing and a curse. I tried to make myself believe such a “spiritual” name had to be a blessing—why, who else in the whole wide world had a name like Heaven Leigh? No one, no one, whispered the little bluebird of happiness who lived now and then in my brain, singing me to sleep and telling me that everything, in the long run, would work out just fine … just fine. Trouble was, I had an old black crow roosting in my brain as well, telling me such a name tempted fate to do its worst.
— Heaven Leigh Casteel, Heaven
Advertisement:

The Casteel Series is the second Generational Saga from V. C. Andrews, published after Seeds of Yesterday. Andrews completed the first two books in the series shortly before her death from breast cancer in 1986. The series was completed by her officially appointed ghostwriter, Andrew Neiderman. Among Andrews' fans, this series (or at least the first two books) is held in particularly high regards, with some saying that they're Andrews' best work.

When she is ten years old, Heaven Leigh Casteel, a girl living with her extremely poor family in a mountain range called the Willies, learns from her grandmother of her father's first wife Leigh, a Boston socialite and teenage runaway who married Heaven's father Luke and died giving birth to Heaven. Heaven receives her late mother's few belongings, the most precious being a one-of-a-kind doll that is identical to Heaven's mother (and, aside from the hair color, to Heaven herself).

In the first book Heaven, the Casteel family—Heaven, her half-siblings Tom, Fanny, little Keith and Our Jane, her stepmother Sarah, her pa Luke Casteel, and his parents Annie and Toby—are known as "the scum of the hills," the poorest of the poor even among the poverty-stricken West Virginia village of Winnerrow. Heaven and Tom dream of making a better life for themselves and their family by completing school and getting a college education. Heaven's fortune seems to change for the better with the arrival of newly arrived City Slicker Logan Stonewall, who becomes Heaven's first love. But when the heart of the family, Granny Casteel, dies, Luke Casteel—never the greatest provider to begin with—completely abandons the family, while stepmother Sarah, fed up with his philandering, leaves the children to fend for themselves in the depths of a harsh mountain winter. Desperate for money, Luke returns with a plan to sell his children. Heaven finds herself sold to a dangerously abusive woman named Kitty and her weak-willed husband Cal, who emotionally manipulates Heaven and ultimately takes her virginity. Heaven, bruised but undaunted, becomes even more determined to find her lost siblings, claim her Boston heritage, and make something of herself.

The second book, Dark Angel, continues where the last one left off, with Heaven traveling to Boston to meet her glamorous maternal grandmother Jillian, and her step-grandfather Tony Tatterton, the owner of a prestigious toy company. Staying at a snobby private school and forced to abide by Tony's stern order to cut ties with her Casteel siblings, Heaven finds her only friend in Tony's reclusive younger brother Troy, whose air of melancholy and mystery draws Heaven ever closer to him, even as Tony warns her to stay away. Unknown to Heaven, there is more to her mother running away than she ever could have thought, and the reasons aren't pretty.

Fallen Hearts, the third book in the series (and the first to be written by Neiderman), picks up two years after Dark Angel, with Heaven, now a successful schoolteacher, on the verge of marrying Logan Stonewall while still grieving the deaths of her loved ones. Tony invites them to spend their honeymoon at Farthingale Manor, to which Heaven reluctantly agrees, leading to a plan to build a Tatterton Toy Factory in Winnerrow in hopes of reviving the impoverished community. But Heaven's uneasiness around Tony, Jillian's mental breakdown from the previous book, and her suspicions of her jealous sister Fanny's behavior around Logan drive Heaven once again to loneliness, and having a one night stand. Yet another tragedy leads to Heaven seeking custody of Drake, Luke Casteel's youngest child from his third marriage, ending in a final confrontation with Fanny.

Fallen Hearts was followed by Gates of Paradise, taking place about 18 years later. The story revolves around Heaven's daughter Annie, who is paralyzed from the waist down in a car crash. Tony invites Annie to Farthy, promising to care for her as an an act of atonement toward Heaven. Annie, who has dreamed of visiting Farthy since childhood, is shocked to see its rundown condition and disturbed that Tony keeps mistaking her for her mother. Tony feels he let Heaven escape Farthy once before, and he is determined not to let Annie slip through his fingers.

The series concludes with Web of Dreams, which is framed as a Secret Diary belonging to Heaven's mother Leigh. Daddy's Girl Leigh is shocked when her seemingly perfect parents suddenly divorce. Her mother Jillian immediately marries the handsome (and much younger) Tony Tatterton and takes Leigh to Farthingale Manor. In spite of Farthy's luxury and prestige, Leigh finds her new home lonely and cold, her only comfort being Tony's five-year-old brother, the precocious but fragile Troy. But Farthy is a much darker place than Leigh could have ever imagined, forcing her to leave Troy behind and flee Farthy forever.

that a film adaptation of the series was in the works for Lifetime Television (who had also adapted the first four Dollanganger Series books and My Sweet Audrina). Shooting began in Fall 2017 and the films were aired over several weeks in Summer 2019.

Books in The Casteel Series:

The Casteel Series provide examples of: