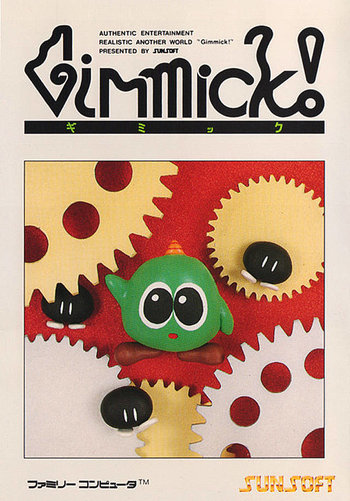 Gimmick! is a 1992 Japanese Platform Game for the Family Computer by Sunsoft, released in Scandinavia as Mr. Gimmick the following year. In this game, an oni named "Yumetaro" (lit. dream + a boy's name) finds himself lost in a gift shop, when he spots a father looking to purchase a gift for his daughter's birthday. The oni hides among a bin of toys, and the father purchases him, unaware that he is actually a mystical youkai.
Advertisement:

When the daughter unwraps her present, she is immediately enamored with the little Waddling Head, and he quickly becomes her favorite toy. The other toys in her bedroom grow anxious of the newcomer's popularity, and that night they come to life and kidnap the girl, taking her through a portal to a Floating Continent. Alone, Yumetaro leaps after her to save her.

Yumetaro's main weapon is a bouncing star that he generates above his head. He can ride the star if he leaps on top of it. He can also carry in his inventory up to three of the following, in any combination: fireballs that can fly straight, bombs with a reasonable blast radius, and Healing Potions.

running on the exA-Arcadia system, titled Gimmick! exAct☆Mix, was released in 2020. It gives the game a 16-bit makeover with a redone FM synthesis soundtrack by Manabu Namiki, remixing the original compositions of Masashi Kageyama. It also adds a tutorial, a time attack mode, a "stage edit" mode that rebalances the game's difficulty, and other extra features.

Although not directly related to the similar Hebereke series, Gimmick! was linked with it in a PlayStation compilation.