The Mole
aka: Reverse Mole 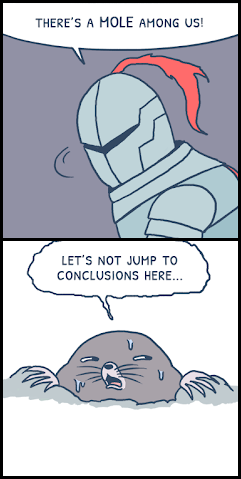 A hero or villain who is secretly working for the other side. Their job is to gather intel for their superiors and/or sabotage the other side's efforts while their supposed comrades are none the wiser.

If one of the heroes had been in a romantic relationship with the Mole before The Reveal, he or she may ask "Was It All a Lie?" Particularly heartless Moles may reveal that yes, I Was Only Pretending To Like You and gleefully taunt them over it, while others may have indeed developed feelings for the person being betrayed and may wind up Becoming the Mask.

Compare Big Bad Friend (an actual friend who is nevertheless a villain), Evil All Along (if the mole was pretending to be a hero but turned out to be on the villain's side) Turncoat and Les Collaborateurs. Contrast Friendly Enemy (a known villain who is nevertheless a friend). See also The Infiltration for the short-term version, and Mole in Charge for particularly successful spies who wind up the boss.

Ten Little Murder Victims is an example of a plot concerning the hunt for The Mole. A Wolf in Sheep's Clothing is The Mole via false identity. Flock of Wolves is a group where everyone is The Mole. And Social Deduction Game is when players have to actively find out who the mole is.

SpongeBob briefly sides with Plankton to help him get back at Mr. Krabs for tormenting him by letting him in on his secret fear of mimes.

SpongeBob briefly sides with Plankton to help him get back at Mr. Krabs for tormenting him by letting him in on his secret fear of mimes.