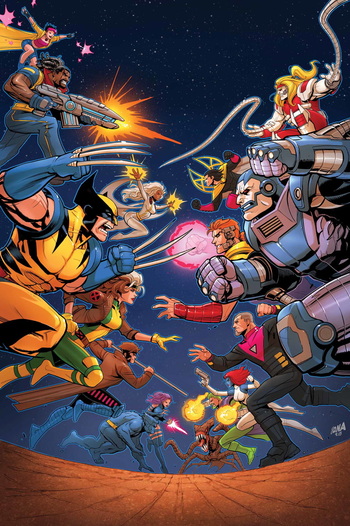 They're back! Marvel's most X-Treme Mutants!
You paved the way for everything I've done here... But I'm afraid the era of the extreme is over. The world that's coming deserves a better class of mutant. One that isn't burdened by all those pouches filled with aggression and inner turmoil.
— Cassandra Nova, X-Men '92 #1, "Hope You Survive the Experience"
Advertisement:

X-Men '92 is a 2015 Marvel comic book, co-written by Chris Sims and Chad Bowers with art by Scott Koblish and Alti Firmansyah. Launched as a Secret Wars tie-in, X-Men '92 takes place in a broad strokes version of the classic X-Men: The Animated Series. After a brief run of five issues, it returned as part of the All-New, All-Different Marvel initiative, this time being allowed a run of ten issues. The last issue was released in December 2016. In January 2022, it was revealed that a new mini-series would be released set in this universe called House Of XCII, giving the iconic House of X storyline a 90’s flair.

Do not confuse with "X-Men adventures", the actual Comic-Book Adaptation of the series. X-Men '92 is an homage to the TV series, but has its own stories.