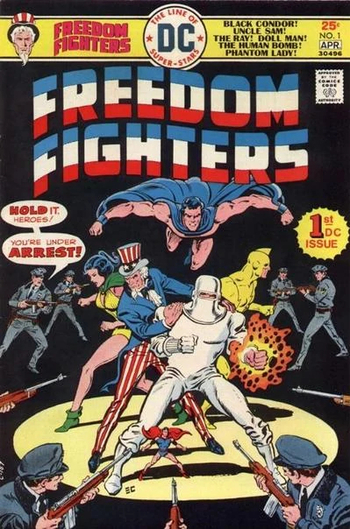 Even Patriotic Heroes can't catch a break!
The name's Uncle Sam, and we got work ta do.
— Uncle Sam
Advertisement:

The Freedom Fighters are a team of American super-heroes in The DCU, made up of characters bought out from Quality Comics and led by the nation's spirit Uncle Sam. Originally they were written as the only heroes on Earth-X, a universe where the Nazis won an extended World War II and had completely taken over. They fought against tyranny and oppression in a completely authoritarian world. Eventually, they were integrated into the main Shared Universe. They still operate together in the modern era mostly using Legacy Characters and fight against contemporary problems that face the country such as corruption and terrorism.

In the 1980s, the Freedom Fighters got a couple of retro tales in the pages of All-Star Squadron (which shifted their universe of origin to Earth-Two), a couple of modern tales, and participation in the Crisis on Infinite Earths. Individual members got revamped in The '90s, and some were replaced by Legacy Characters. Then, most active members died in the Infinite Crisis #1 (December, 2005), to be replaced by even younger Legacy Characters, and new recruits. The newer version/s of the team received a couple of mini-series over the following years, but so far haven't been more successful than their predecessors in maintaining an ongoing series.

A version of the team appeared in Grant Morrison's The Multiversity. They also appeared in Convergence. The team also appears in Freedom Fighters (2018).