Characters / The House Of Craziness Original 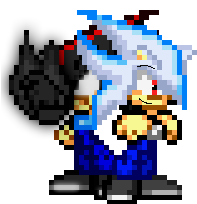 This isn't a hotel, but you're welcome to stay!
The owner and leader of the group. Even though he's level-headed, he has a very destructive dark form that can get out of control. 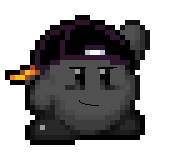 to see his humanized form.
A mirror puffball who's a Jack-of-All-Trades, for the price of sanity. His powers come from the cap on his head.

"Wonder what Connor and Shady are doing at a time like this..."
A hedgehog warrior trained by Akuma. He's slowly "evolving", training under a higher power.

Besides, I haven't had a good fight in YEARS.
Click here

to see his current form. Spoilers!

"I HAVE COME TO STOP YOU! Cause Reasons. And because I'm Bored."

"...Don't ask.
An self-insert of the user Chunck.co. He looks after Shady to keep himself from fixing the fourth wall.

"I probably shouldn't have been carrying my gun in public either..."

An Assassin from some timeline, he finds the house before the others go on trial. And he likes sitting on rooftops as well.

"Note to self: never screw with dimensional portals."

You have until the count of three until I MAKE you leave.
The residential teal wolf. Even though she's mostly reserved, she can have anger issues.

"Kid, just give up. Even after normal circumstances you don't stand a chance."
A human who serves at the main antagonist. Nobody knows what he's up to.

"In the end, it's not enough to merely lock them up. I must strip them of what power they have. For power corrupts even the purest of souls."

"You and your residents are under arrest!"
The main antagonist of the Trial arc. Was revealed to be a "Super" after Connor calls him out on it in the end.

Supporting Characters
These characters breathe life in the outside, but since they're minor, they're all grouped in this folder.

"Remain calm, we got everything under control"
Works alongside Jacques in protecting the city. They do most of the physical work.

"I.T was created to help and control chaotic. what we think is NONE of your concern"
Knights Of Faith
A group of representatives from other worlds that quest across the universe, helping out with major issues. For some reason, they came to the house, and warn about a future major event.

"How was I supposed to know magic was bad for humans?"
A sixteen year old human who carries the Relic of Energy. He isn't really good at his job of slaying villains, but he is great at making friends with people, and helped found the Knights of Faith in the first place. He is technically the de facto leader, despite not acting it.

"Halt evil hedgehog, in the name of the Knights of Faith!"

"I said NOT to call me Paria!"
A seventeen year old witch that was entrusted with the Relic of Time. She is overly serious about her job as a hero, to the detriment of others, however there is a softer side to her once you get to know her. She REALLY likes chocolate.

Characters who have left
These Characters have left the house for good for one reason or another.

"Well, I'm just going on a rational basis and saying that's not a good sound."
A rather kind and well mannered demon who came to the house thinking it was a vacation spot.

"That.. was one of the stupidest ideas I ever had. Not stupidest. Pretty close though."
A Cat-Hedgehog hybrid that enjoyed being kind and motherly to other people. She had very positive outlook.

Spoiler Characters
All of these characters are important to a plot or a plot twist at some point.