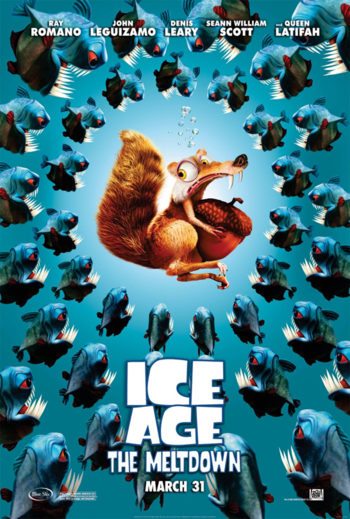 The chill is gone.
Ice Age 2: The Meltdown is the sequel to Ice Age, and the second film in the Ice Age franchise, released on March 31st, 2006.
Advertisement:

Manny, Sid and Diego are living in a large valley with an enormously high ice wall filling one end. The trio discover that the ice wall is actually barely holding a massive body of water that would flood the valley to nearly a mile underwater. A vulture tells them that there is a boat at the other end of the valley that may save them all, but they have only three days to make it or die. Manny is having trouble facing the fact that he may be the last mammoth left. Along the way, they meet Ellie, a mammoth who thinks she is a possum, and her opossum "brothers", Crash and Eddie.

The film received mixed reviews, but was warmly-received by the general public, and became a box office success, grossing $660 million worldwide against its $80 million budget.

This film is followed by Ice Age 3: Dawn of the Dinosaurs.

"Sorry. My stomach HATES me!"

"Sorry. My stomach HATES me!"