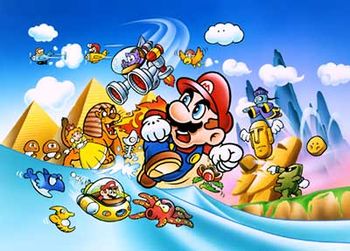 So if Mario's walking on water, does that mean he's bigger than Jesus? note  His apparent ability to tri-locate can mean any number of things.
Welcome, and enter the center
Of my Super Mario adventure
My girl is trapped on the other side of town
So I'm movin' in leaps and bounds
Folks around my way think I'm strange
But there's a villain to blame
Even my ma, she thinks I'm crazy
But I've got to rescue Daisy (let's go!)
— The opening lyrics to the song based on this game,

performed by Ambassadors of Funk

Released on the then-debuting Game Boy, Super Mario Land marks the famed plumber's first handheld adventure in the Super Mario Bros. history, and fifth overall. Along with Tetris, it was one of the original launch titles for the system, released in 1989. In this game, Mario travels through Sarasaland to rescue Princess Daisy from the alien invader Tatanga. To do so, he also has to liberate the inner kingdoms as they have been overtaken by the villain.

Unlike most installments of the franchise, Super Mario Land had no involvement from series creator Shigeru Miyamoto and his EAD development group, the game instead being produced by Gunpei Yokoi and developed by Nintendo R&D1, the team who were responsible for all Metroid games from the original to Zero Mission except for the Metroid Prime sub-series (which was outsourced). The sprites in this platformer are very small, due to the Game Boy's small screen, which supports only four shades of gray. As a result, the game stylistically and mechanically harkens back to the original Super Mario Bros. and by extension The Lost Levels, instead of the more sophisticated (and, at the time, still in full swing) Super Mario Bros. 2 and 3. The sequel, Super Mario Land 2: 6 Golden Coins, had larger sprites and marked the debut of Mario's Evil Counterpart, Wario.

Other differences from Super Mario Bros.:

The game is also notable for being the first appearance of Princess Daisy. While she has yet to properly appear in another mainline Mario title, she would later go on to become a staple of the franchise's many spin-offs, where she would develop a distinctive Tomboy Princess characterization, a friendship with Princess Peach, and an implied relationship with Mario's brother Luigi.

Please note that Super Mario 3D Land, which was released for a later handheld console, has nothing to do with this game (or series, for that matter).