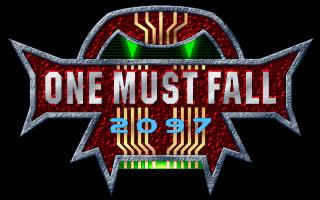 One Must Fall 2097 is a Shareware Robot Fighting Game released for the PC by Epic Megagames in 1994, released as freeware in 1999. It is notable as one of the highest quality Fighting Games released exclusively for the PC.

The year is 2097. In this future, national governments are puppets of the multinational corporations. One such corporation, World Aeronautics and Robotics (WAR), runs the entire show with a silk-covered iron fist. WAR was started as a research institute to provide Human-Assisted Robots for space travel. Their first prototypes were activated in 2009 and were immediately put to use by a conglomeration of companies from Japanamerica to build the first ACTIVE space station. The HARs were better than conventional robots in that they were completely operated by a single human whose brain controlled the robot's systems via remote. The "pilot" actually "became" the robot for all intents and purposes, but no danger to the pilot was possible.

Now, WAR is Earth's leading corporation. Every other company relies on WAR for space travel to Earth's four off-world stations. WAR provides systems for governments and companies alike for security and defense.

WAR is power. And you're a part of it.

Ganymede, the next moon on Jupiter to be colonized, needs a WAR representative to watch over it. The Board at WAR has decided that the applicants for the position, being equally qualified, should fight for it. Now, the ten applicants must choose which of the ten newest HARs will be their weapon and beat the others in a one-on-one competition. It is not merely for position that they fight... many have secret agendas and a thirst for the information that only rule of an entire moon could provide.

Anyone who has even a remotely important position at WAR is trained in the use of HARs. Most have spent considerable time "in" a real working model to get the feel of it. But the use of HARs for sparring is a completely new scheme brought about by the need to know that when one company attacks another the 'bots can handle the stress. The idea of using WAR robots for entertainment is a new one, but The Company believes that it will be good press for the next prototypes from the WAR design rooms. Therefore, the public is invited to view the proceedings. The future of Ganymede, WAR, and maybe humanity itself, hangs in the balance.

. If you want to know why you should care, be sure to check out a review

A bug-plagued Contested Sequel, One Must Fall: Battlegrounds, which attempted to move the series online and into the third dimension, was released in 2003. It hit the Polygon Ceiling pretty hard.

is currently in development.

This Work Shows Examples Of:

Alternative Title(s): One Must Fall 2097