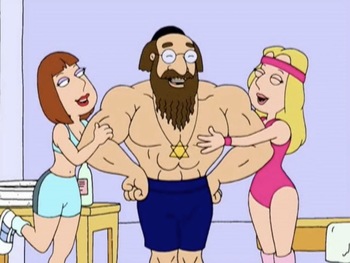 Three years of mandatory military service will tend to do this to people.
"I want a steamy little Jewish Princess!"
— Frank Zappa, with one of the very few SFW lines from his song "Jewish Princess" from Sheik Yerbouti.
Advertisement:

Some dig Asians. Some prefer their lovers Latin. And some feel that Everyone Looks Sexier if French. And then there are those who find that when God chooses a people, he pulls out all the hotness stops.

A sort of sub-trope to Everyone Looks Sexier if French, dedicated to the Chosen People. Maybe it's the Woobie factor (they are pretty much the world's Butt Monkeys); maybe it's their sense of humor (everybody knows Jews are funny). Maybe it's the strength of the Badass Israeli or just the sweetness of the Nice Jewish Boy. Or even the allure of sophisticated Jewish culture. The Gentile may end up Converting for Love.

While primarily an American trope this can be seen in other countries with large Jewish populations, such as France. On the other hand, it's an unknown trope in countries with negligible Jewish populations. Though this trope appears relatively new (as in, post-World War II), it can be traced back to the 19th Century where this archetype was known as la belle juive (the beautiful Jewess) in Romantic European literature, and as the name implies it was Always Female and tended to be portrayed either as a tragic heroine or The Vamp. Male examples of this trope were virtually unknown (and tended to be played negatively) until modern times.

Obviously, compare and contrast Race Fetish, Latin Lover (which can overlap if they're Sephardic), Mighty Whitey and Mellow Yellow, Where da White Women At? and, well, any other ethnic or national tropes. Contrast Shiksa Goddess, and compare and contrast Jewish and Nerdy.