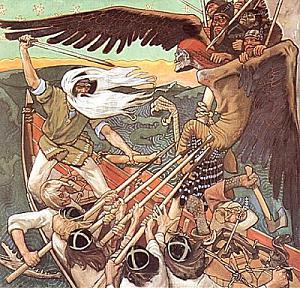 "Vaka vanha Väinämöinen..."
I am driven by my longing,
And my understanding urges
That I should commence my singing,
And begin my recitation.
I will sing the people’s legends,
And the ballads of the nation.
Advertisement:

The Kalevala, as composed by Elias Lönnrot, is a product of the 19th century (published 1849). Lönnrot's source materials go back much farther; how much farther is not exactly known — the first description of Finnish Mythology is that by bishop Mikael Agricola in 1551. It is thought that many of the folk traditions that Lönnrot cast into the Kalevala are Older Than Print, though Lönnrot modified them to weld them into a single coherent narrative.

God help you if you confuse it with the flash game Legend of Kalevala, or the iOS puzzle game, Heroes of Kalevala.