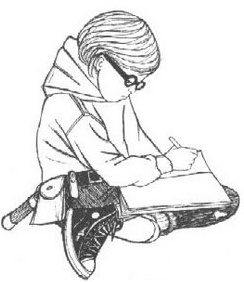 What is she writing? Wouldn't you like to know!
Advertisement:

Harriet the Spy is a 1964 book by Louise Fitzhugh about a girl named Harriet who likes to spy on neighbors. Two sequels were written by Fitzhugh—The Long Secret, published the year after Harriet, and Sport, which was published after Fitzhugh's death. Several other sequels were written afterward by ghost authors. The original was adapted into a movie in 1996 starring Michelle Trachtenberg as Harriet and Rosie O'Donnell as Ole Golly, which is notably the first theatrical film from Nickelodeon; as well as into the movie Harriet the Spy: Blog Wars in 2010. A 2D animated series, produced by Titmouse and The Jim Henson Company debuted on Apple TV+ on November 19, 2021.

Harriet is a precocious eleven-year-old who writes down everything because she wants to be a writer when she grows up. She keeps a composition book with her at all times, writing down her observations and general thoughts that pop into her mind. After school, she goes on her spy route. Every day she slinks around people's homes and places of work, watching them and writing down everything they do. One is a birdcage-craftsman who owns twenty-six cats, one is a rich crazy lady who stays in bed all the time, one is an Italian family that runs a deli, and a few others. She also writes down her observations of her parents, teachers, classmates, her best friends Sport and Janie, and her beloved nanny, Ole Golly.

One thing about Harriet, though: she's extremely secretive about the contents of her notebook. No one knows what she writes in it, and for good reason—very few things she writes in it are flattering. They might be true, but they're uncomfortable truths. Sport is poor and does the cooking and housework for his dad, who is a starving writer—his mother left and took all the money. Janie is scary and wants to make explosive chemicals with her chemistry set. Rachel Hennessey, the assistant to the Alpha Bitch, has no father. Harriet's own parents are more concerned with their lives than with their daughter. Harriet writes down everything, not just the nice stuff.

So you can imagine what happens when Harriet's notebook falls into the wrong hands...