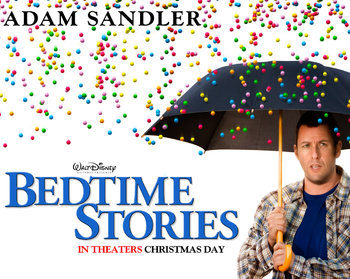 Bedtime Stories is a 2008 American fantasy comedy film. It was directed by Adam Shankman, with a screenplay by Matt Lopez and Tim Herlihy.

In the Magical Galactic Kingdom of Nottingham, Skeeter Bronson (Adam Sandler) is an unappreciated warrior from Greece. Well, not really.

In reality: Skeeter Bronson is a handyman in a hotel, in which he's been working for 25 years. Ever since his dad Marty Bronson (Jonathan Pryce) owned and ran it. In fact, when his dad sold the hotel to Mr. Nottingham (Richard Griffiths) (starting a hotel empire), Skeeter was promised to one day run it. Or so he hoped. You see, despite being a fabulous worker for the same hotel (well, two different buildings, but that's beside the point) he has been recently passed up to be the manager of the third building in that specific hotel's lineage within the empire in favor of the snotty Kendall Duncan (Guy Pearce), simply because he is dating Nottingham's daughter Violet (Teresa Palmer).

With nothing to do at the kids' home, Skeeter starts to tell bedtime stories in order to entertain the kids. These stories vary in theme, from Ancient Grome to Sci-Fi. The kids often throw in events to mix up the story, coming up with better stuff than Skeeter's Real Life events. When the events the kids throw into Skeeter's story affect Skeeter in real life, Skeeter uses this to his advantage.

This film is entirely unrelated to the 1979 Game Show produced by Merrill Heatter and Bob Quigley. Nor does it have anything to do with the Madonna album of the same name. And most especially not related with the similarly named YouTube series, which is definitely not for children either.Also unrelated to the David Niven and Marlon Brando film, Bedtime Story (1964).