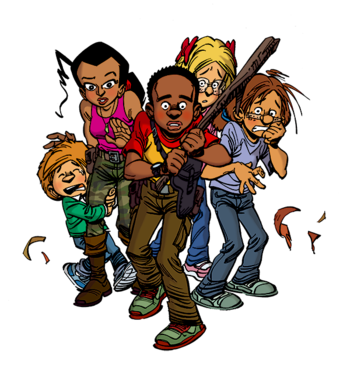 The children of Fortville. From left to right: Terry, Leila, Dodji, Camille and Yvan.
Advertisement:

Seuls ("Alone") is an on-going Franco-Belgian comic series, written by Fabien Vehlmann and drawn by Bruno Gazzotti. Its first volume was published in January 2006, with a release schedule of one volume per year. It is currently composed of ten volumes divided into three cycles, and, according to the authors, should amount to a total of twenty volumes.

Seuls follows the adventures of a group of five children note Dodzi, Leila, Terry, Camille, and Ivan from a fictional town named Campton, who wake up one day to discover that everyone else has disappeared. All the adults are gone, and the only other living creatures they meet are animals and, later on, other children. Of course, the heroes attempt to discover what happened, while also trying to survive by themselves. There are many dangers to be faced, from animals gone wild to rival groups of children.

Over time, they discover that this world isn't what it seems. Mysterious forces are at work, and they end up dragged in a conflict between two warring groups, respectively called the First Families and the Last Families.

A movie adaptation has been released in France on February 8th, 2017.