Due to their importance to Hickman's main X-Men run, all spoilers for House of X and Powers of X are left unmarked. You Have Been Warned. 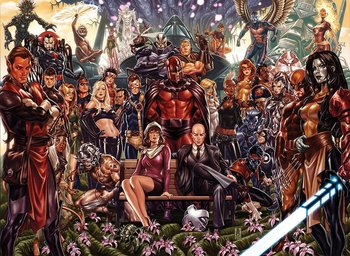 You have new gods now.
And if you find yourselves asking, who are these mutants to think they can dictate terms to us? We are the future. An evolutionary inevitability. The Earth's true inheritors. You closed your eyes last night believing this world would be yours forever. That was your dream. And like mine... it was a lie. Here is a new truth: while you slept, the world changed.
— Professor X, House of X #6
Advertisement:

Famed writer Jonathan Hickman (Fantastic Four, Avengers and Secret Wars) makes his grand return to Marvel Comics as part of the Marvel: A Fresh Start initiative. What could be a project big enough for his profile? Why, the X-Men of course.

The stories are said to redefine the X-Men and their place in the Marvel Universe, on the level of Len Wein's Giant-Sized X-Men or Grant Morrison's New X-Men. Coinciding with the launch of House of X and Powers of X is the cancellation of every ongoing X-Men seriesnote only the Dead Man Logan miniseries continued, marking the first time a single writer has had this much control of the franchise since Chris Claremont's initial run.

The events of Hickman's long-form narrative begins with the previously-unseen first meeting between Professor X and Moira MacTaggert, revealing a major Retcon that few were expecting: the X-Men's closest Muggle ally was actually a hidden Mutant herself. Moira's power allowed her to live through nine vastly different lifetimes with one thing in common: mutantkind is always doomed in every future. To get around this in her tenth — and quite possibly final — life, she and Xavier initiated a series of secret alliances with several mutants, including several of the X-Men's worst enemies, in order to create a scenario in which mutants are able to secure a future where they can eventually supplant humanity as the dominant species on the planet. Although Moira had been thought of as long dead, she had since been in hiding, guiding Xavier and Magneto with all the knowledge that she's attained.

The story proper begins years after the Genoshan Genocide, with mutants across the globe relocating to the sentient island of Krakoa, which has offered to sell various game-changing medical products to the world in exchange for recognition on the global stage. After pulling a few strings, the United Nations recognizes Krakoa as a sovereign nation, but in secret, members of various organizations — anti-mutant or otherwise — have converged their forces into a new organization, Orchis, which seeks to ensure that humanity survives at any cost. Orchis seeks to create the perfect Sentinels to fight against the X-Men, which naturally puts both sides at conflict with one another.

One of the biggest changes to the status quo is that, thanks to massive amount of data that Xavier has gathered over the years, dead mutants can now be fully resurrected in new bodies. The end goal: to resurrect all mutants, including the 16 million that were killed in Genosha. With the existence of a new mutant nation, three laws exist: mutants must make other mutants, mutants cannot kill mankind (except in self-defense), and Krakoa must be respected. Meanwhile, mutants have full diplomatic immunity, so any and all mutant criminals must be extradited to Krakoa to face judgment on their terms.

So begins a new era for the X-Men, as former enemies must work together to stop various threats to mutantkind's existence from without and within.

The run began in July of 2019 with two 6-issue miniseries published over 12 weeks with one large story told across both, much in the vein of Hickman's earlier work on New Avengers/Avengers with the events of both stories intricately tying into a larger whole. These series are:

After House of X and Powers of X, a new line of X-books was launched, Dawn of X, with Hickman continuing his run with the main title, along with some work on other titles, while overseeing the other X-Men books. The books that Hickman is directly working on as part of the first wave of X-Men titles include:

With the conclusion of X of Swords, the next initiative was launched known as Reign of X, which deals with the fallout of the tournament and the events that transpired. The main X-Men book, which had been acting as an anthology of one-shots, is also set to come to an end with issue #21. Hickman is then set to write another book, with only one word to indicate what it is about: Inferno.

Examples of tropes in this run:

Charles Xavier: I was smiling because I have recently had the most wonderful dream. Of a better world and my place in it.
Moira MacTaggert: Well, here's the thing, Charles... It's not a dream if it's real.
— Powers of X #1