The League of Super Evil 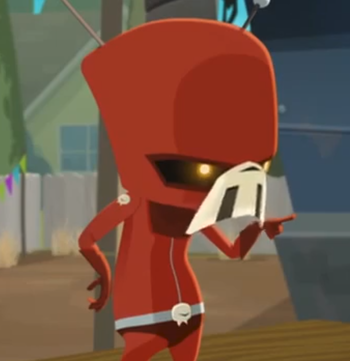 The leader of the titular League, a short red man, always seen wearing a helmet. He is very determined, yet most of the times his persistent plots for domination are foiled either due to poor planning, bad luck, short-sightedness/pettiness or the ineptitude of his minions. But most of the time, its all of the above.
Advertisement: 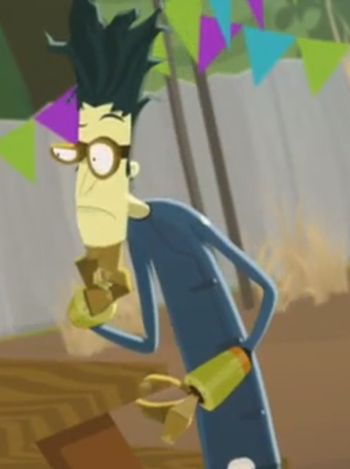 The brains of the League, a scrawny man with goggles, a metal chin, and metallic pincers in place of his hands. He is always the first of Voltar's minions to object to his harebrained schemes, but rarely gets taken seriously - a problem further exemplified by how he's usually on the receiving end of almost any physical abuse. 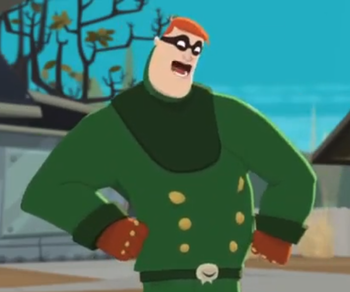 The muscle of the League, a large redheaded man in green. He's a very kindhearted soul, if childish at times, and he enjoys baking, gardening, helping little old ladies cross the street, and suggesting reasonable solutions to problems. In fact, he's not very evil at all, much to the chagrin of his teammates. 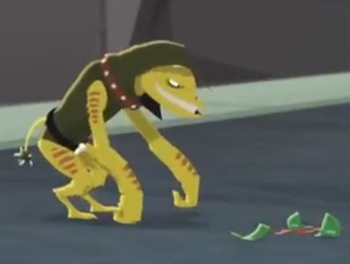 The League's pet, a reptilian-canine creature called a Pan-Dimensional Doomhound (Hellhound in "Table for Four"). He possesses the ability to teleport between realities in a flash of flame. He also has a pretty big appetite, which often causes trouble for the League, especially Doktor Frogg, who can never seem to get on his good side.