This page is for antagonists of the Kid Icarus series. For the main page, see here.

All spoiler tags have been removed. Read at your own risk.

Medusa, Goddess of Darkness/Queen of the Underworld 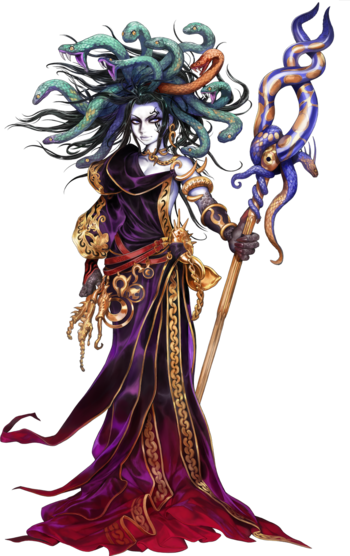 "So hurry to me, Pit. I'll strip you of your wings and sever you from the heavens forever!"

Known for her serpentine hair and chilling gaze, Medusa's goal is nothing less than total domination. 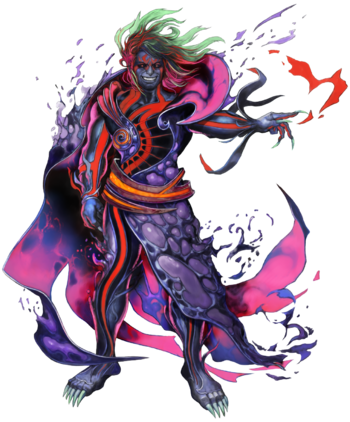 "Welcome to my underworld, Pitty Pat. You too, Pretty Palutena."

The true Lord of the Underworld. Other creatures, such as Medusa, are merely his pawns.

Many spoilers lie ahead. You have been warned.

Hades: My intentions are always honorable. You know that. 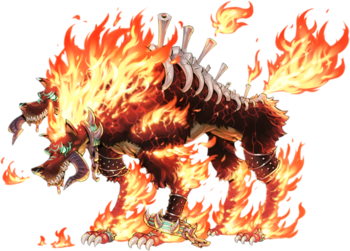 A devil dog with two heads. Its body is wrapped in fire and spits out bullets of magma energy.

A massive serpent that serves as one of the Underworld Army's commanders. Originally it comprised of one head and came out of water, but now it has two more heads and takes to the sky. 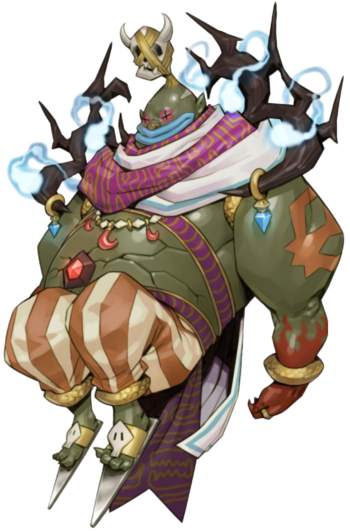 "The extra H is for Hamazing!"

The God of Death. He's a bit on the crazy side. 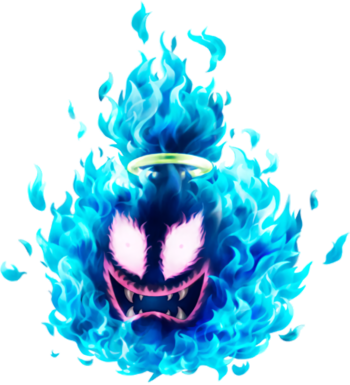 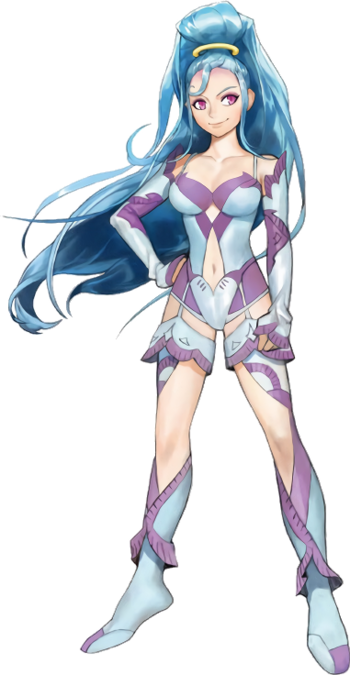 "Do I look like a strategy guide? In case you haven't noticed...THIS ISN'T THE ASK AUNTIE PANDORA HOUR."

The Goddess of Deceit. She likes to confuse whoever tries to enter her realm. She is allied with Medusa. 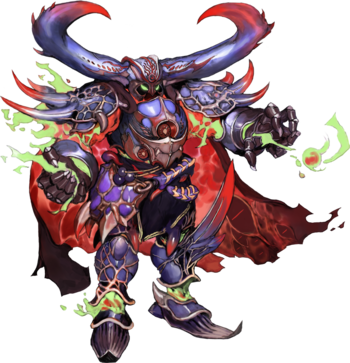 A warlord aligned with Medusa. In the past, she (yes, she) was a childhood friend of Magnus, and the two fought monsters together as part of the same mercenary group. 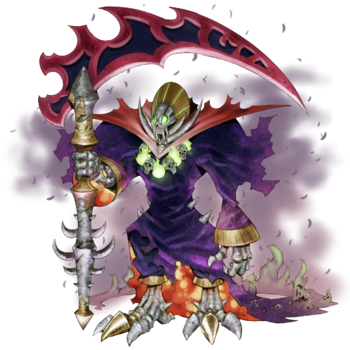 The leader of the Reapers and the boss of the Reaper's Fortress, the Great Reaper apparently sends its subordinates to collect the souls of the humans fighting in the war.
The Underworld Gatekeeper 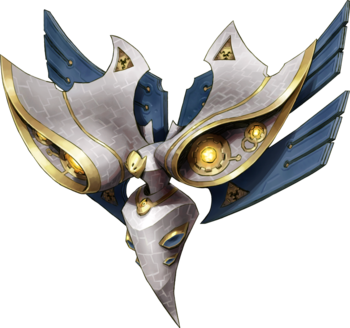 A powerful robotic member of the Underworld Forces, that, true to its name, guards the entrance to Medusa's castle in the Underworld.

Soul-Eating Monster
A massive eel-like creature that patrols the City of Souls. As the name suggests, it feasts on any unfortunate soul that crosses its path, though it's not afraid to try and chomp on an angel. 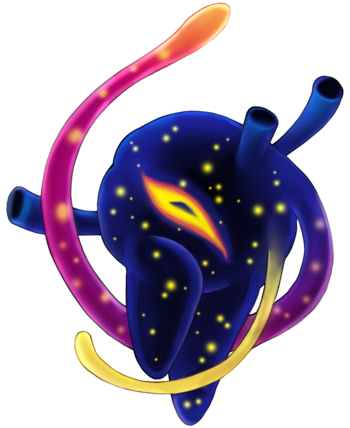 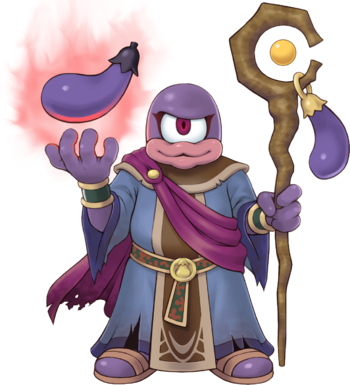 These enemies place a spell on Pit to turn him into an eggplant.
Reapers and Reapettes 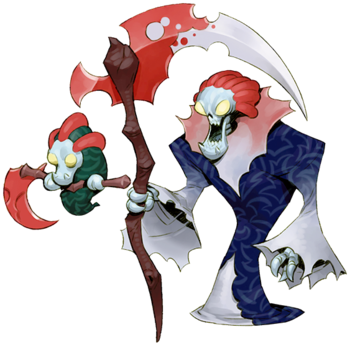 Skeletal residents of the Underworld that lead souls of the dead to their resting place. They are easily excitable and summon small versions of themselves, called Reapettes, when an opponent is spotted.
Tempura Wizard 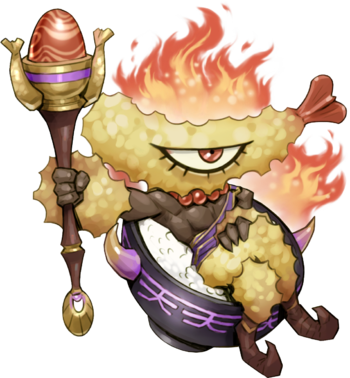 An underworld monster that has shrimp tempura for a head and sits in a rice bowl. He can turn his enemies into tempura with his spells as well, chasing them and, if caught, eating them.
Others 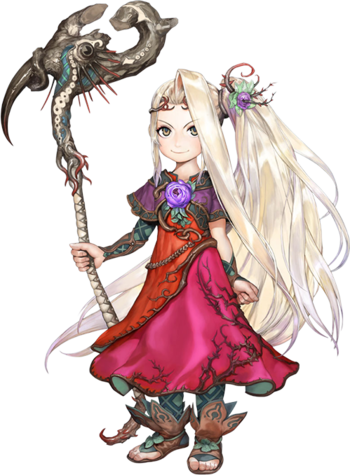 "Good riddance, human scum! The world's better off without you!"

As the title implies, she's the proclaimed Goddess of Nature. Desires the obliteration of mankind for their numerous offenses against nature, and proceeds to act upon it once they impulsively start an international war over Hades' rumors about the Wish Seed. 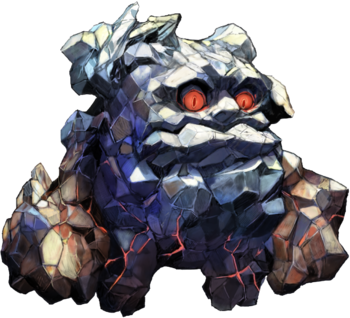 A rocky golem-like being that is an extremely loyal servant of Viridi's. He is one of the leaders of her forces, similar to how Pit leads Plautena's forces.

"Why on earth would I be attacking? I'm far too busy... defending, my dear."

An ally of Viridi. He is the commander of the Lunar Sanctum. 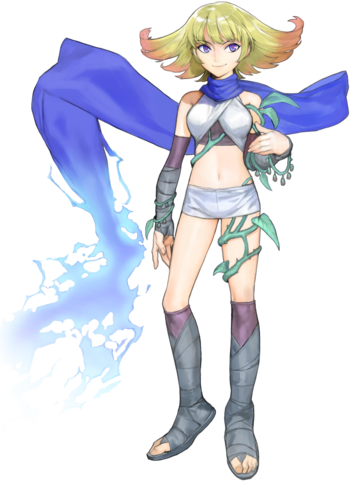 "It's just one fight after another! Today is not my day."

Another ally of Viridi. She specializes in lightning-based attacks.

Forces of Nature Soldiers
Creatures that are created by and serve Viridi, like their name suggests they are made with natural resources.

An arch-demon warmonger from another world. Of Myths and Monsters is largely spent preparing Pit for his foretold attack on Angel Land. 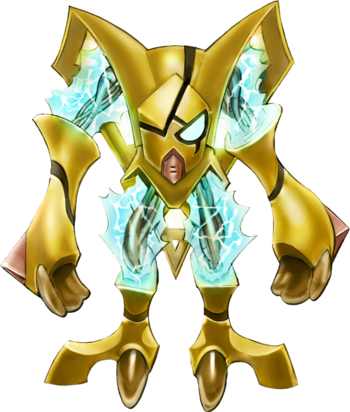 A race of aliens that steal constellations from the heavens to sell. Unfortunately, they were caught up in the war due to having mistakingly taken the three Sacred Treasures which were hidden in one of them.
Space Pirate Captain 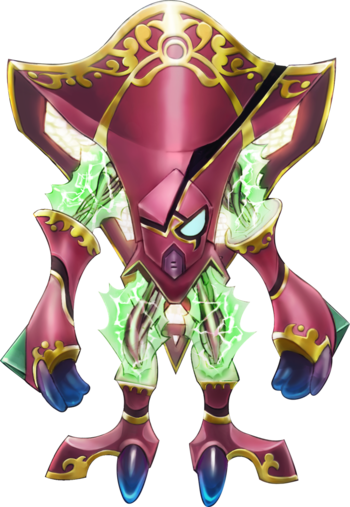 The leader of the Space Pirates, the Captain pilots his starship with his crew, stealing stars that make constellations in the Galactic Sea. He keeps the Three Sacred Treasures with him after stealing the constellation they were hidden on.
Galactic Fiend Kraken 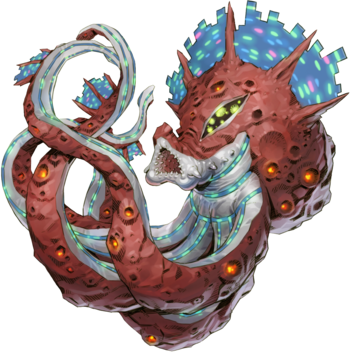 A monstrous predator that hunts in the Galactic Sea. It eats the Space Pirate Captain and decides that Pit is just too good a morsel to pass up on.
Pseudo-Palutena 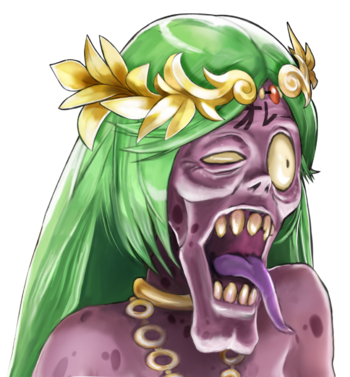 At Least I'm BEAUTIFUL!
A copy of Palutena brought about by Dyntos, she considers herself beautiful, even when you reveal her comically disgusting face.
The Immortal Phoenix 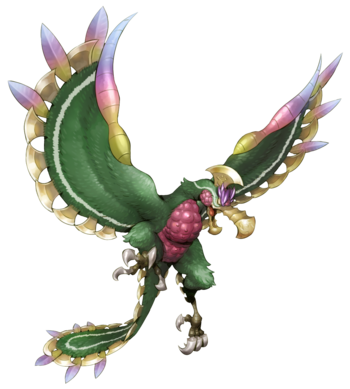 A legendary and ancient bird that lives on top of a volcano. He guards the Wish Seed, which is actually a ruse set by Hades to make the humans die while trying to get to it.
The Aurum

A robotic race of space invaders that harvest the resources of planets. Attracted by the world-wide war between the Underworld, the Forces of Nature, and Palutena's Army, they attack the Earth en-masse to perform their planetary harvest, forcing the gods into an uneasy alliance to deal with them.
The Chaos Kin 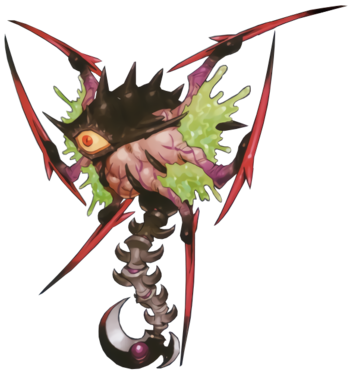 Palutena: Everything changes, Pit... even Gods!

A big ol' Walking Spoiler. An ancient entity of pure evil and chaos that is accidentally released during the battle of the Lunar Sanctum. Using Palutena as its host, it seeks to plunge the world into endless conflict and chaos.