Four powerful Mega level Digimon who serve as antagonists in Digimon Adventure, whose existence were brought forth by Apocalymon. Note that most tropes regarding them as a group only apply to the anime, and that they are listed as such here because the group's existence is acknowledged by Bandainote meaning that they are referred to as such on various cards and for organizational purposes. Due to this connection to them, Apocalymon is listed here as well.

If you wish to see their anime incarnation, click here. 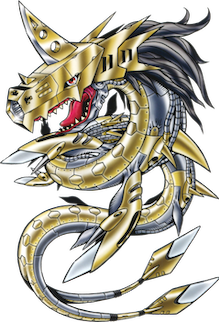 The final form of the Seadramon-species whose whole body is covered in the strongest metal, Chrondigizoit alloy. Its Metal Body reflects every attack. Furthermore, it has the fastest speed of movement among aquatic Digimon. Metal Seadramon was remodeled as a Digimon for use in interception under the sea. Through this, it was completed as a Digimon for use in land, sea, and sky interception. Its Special Move is an energy cannon that is fired off from its snout (Ultimate Stream). 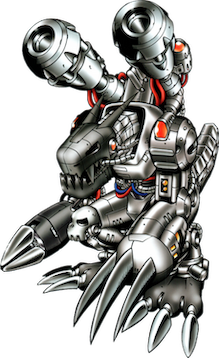 The Digital World's strongest Digimon, whose body is 100% full metal. It was built by synthesizing the parts of many Cyborg Digimon, and it is thought that all of the Cyborg Digimon produced so far were merely prototypes for the completion of Mugendramon. Its power is at a level that would overwhelm other Digimon, and it possesses an intellect which boasts incomparable throughput, but it is a purely mechanical Digimon which does not share their self-will. Instead, someone planted a program containing evil intentions within the Digicore at the center of its body, and Mugendramon is supplied with infinite power from that malice-filled Digicore. Its Special Move is superdreadnought-class energy waves fired from its two cannons (∞ Cannon).

For a non-protagonist digimon, Mugendramon has had a considerable amount of influence on the mythos. Not only is it one half of the nigh-Cosmic Horror Millenniumon, it's also the basis for later digimon such as Chaosdramon.

In Digimon Xros Wars, Mugendramon gains a "powered up" form known as Hi-Mugendramon, which is attained by absorbing large numbers of its minions.
Piemon 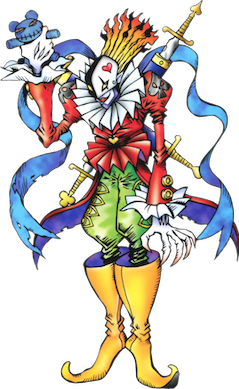 A strange-looking and elusive Demon Man Digimon that is completely shrouded in mystery. Demon Man Digimon have many mysterious qualities, and since Demon- and Undead-species are basically beings from another dimension, their true forms are not totally understood. Why it appeared, and the purpose of its existence are also unclear, and there are currently no means of clarifying those questions. However, its strength is without equal, and if you happen to stumble across Piemon, you probably won't be able to do anything but curse your fate. Its Special Move is an inescapable technique in which it teleports the four swords that pierce the "Magic Box" on its back, causing them to skewer the opponent in the following instant (Trump Sword). 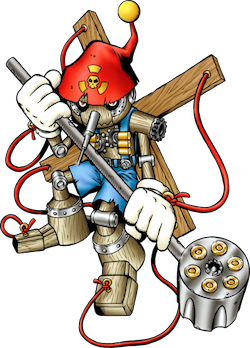 Built from the body of a cursed Jyureimon, it is an Ultimate Puppet Digimon. It is thought that it was probably a single fiendish hacker that constructed Pinochimon from Jyureimon's data. It has an appearance like a marionette, but it can move under its own volition. Its personality is detestable, as it tells fibs, and when a computer presents false information, it is the work of Pinochimon. Its Special Move is packing gunpowder into its revolver-style hammer, then striking with its strongest technique (Bullet Hammer). If one suffers this attack, they will probably vanish without a trace, not just from the hammer's blow but also from the explosion of the gunpowder. 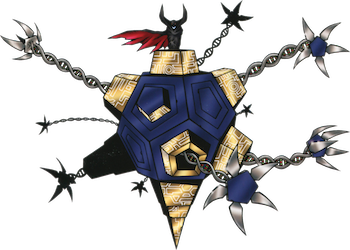 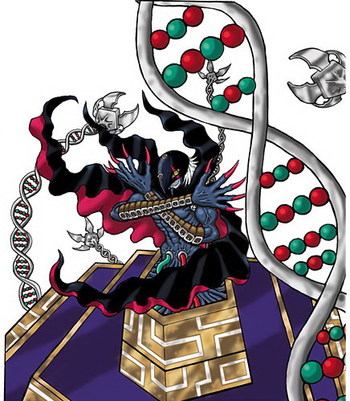 A mysterious Digimon that appeared when negative thoughts gathered through dark power. None know its true identity, and whether this thing is a Digimon cannot be analyzed. Although the reason for its appearance is unconfirmed, it is thought that it seeks to purge the chaotic Digital World and return it to "Nothingness". According to one theory, there is a prophecy of Apocalymon's coming in a book of ancient prophecies.