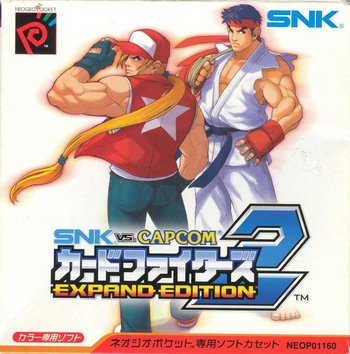 The first time we saw both characters together.
SNK vs. Capcom: Card Fighters Clash is a series of Crossover Card Battle Games made by SNK in association with Capcom at the end of The '90s and marked as the first entry in the SNK vs. Capcom series before the fighting games started the trend (even when few time later SNK vs. Capcom: Match of the Millennium entered to the ring).
Advertisement:

The first two games were released for the Neo Geo Pocket Color between 1999 and 2000, and years later reviving the series with Card Fighters DS in 2006 (in Japan, 2007 for the rest of the world), the last game produced until now.

For more information, there's the article

for the series in The Other Wiki and this one

in the SNK Wikia as well separated articles for every game: Card Fighters' Clash

Franchises in the series:

The series provide these tropes: