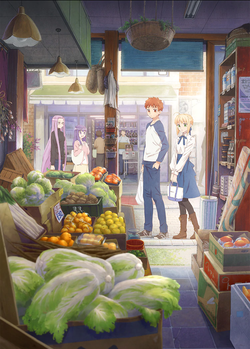 Are you ready? Itadakimasu!
Advertisement:

Today's Menu for the Emiya Family (Emiya-san Chi no Kyou no Gohan) is a Slice of Life cooking-based spin-off of the Fate franchise's Fate/stay night, written and illustrated by TAa. The manga began serialization in the seinen magazine Young Ace Up in 2016, and it has been licensed for an English release by Denpa. The series received an animated adaptation by ufotable, first airing on December 31, 2017 with subsequent episodes airing on a monthly basis. The show is aired by Crunchyroll with the appropriate regional subtitles.

Similar to Fate/hollow ataraxia, it's set in a scenario where all participants of the Fifth Holy Grail War survive and coexist as neighbors, and features Shirou Emiya doing what he does best: preparing dinner for the household.

A video game spinoff for the Nintendo Switch was released in April 2021 for Japan and June 2021 worldwide. It was delayed from its original release because of the COVID-19 Pandemic.

Has a Spiritual Successor in Fate/Grand Order, Eirei Shokubunroku, featuring the FGO Servants cooking meals from across time and space.

The series has examples of: