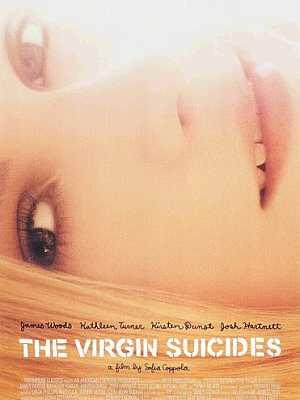 Dr. E.M. Horniker: What are you doing here, honey? You're not even old enough to know how bad life gets.
Cecilia Lisbon: Obviously, Doctor, you've never been a 13-year-old girl.
Advertisement:

The Virgin Suicides is a 1993 novel by Jeffrey Eugenides about the death of suburbia in the 1970s.

The story is told from the point of view of a group of teenage boys who are fixated on the beautiful, sheltered, and enigmatic Lisbon girls: Bonnie, Mary, Lux, Therese and Cecilia. Armed with stolen diaries, photos, an intimate knowledge of the girls' incoming mail, and a telescope, the boys seek to solve the mystery of the girls' existence. The entire book is about the boys trying to find out the motives of the girls and the reason why they come to such an untimely end.

The novel was adapted into a 1999 film by Sofia Coppola as her feature-length debut, and the first time she worked with Kirsten Dunst.