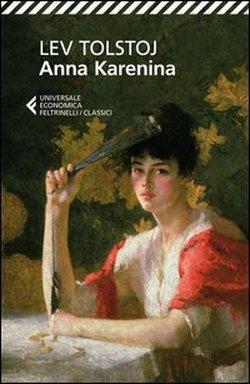 "All happy families are like one another; every unhappy family is unhappy in its own way."
— Opening line
Advertisement:

Anna Karenina is a Russian novel by Leo Tolstoy, who also wrote War and Peace. It was first published as a serial novel in 1873. Like War and Peace, it has numerous characters.

One of the main threads of the novel centers on Anna Arkadaevna Karenina, who is a good, kind, and empathetic but impulsive person and a loving mother who dotes on her son. Like the majority of the women in her social circle, her marriage was determined not by love but by polite courtship and social convenience. She's married to the much older, cold, and highly respected diplomat Alexei Alexandrovich Karenin. One day, after travelling from St. Petersburg to Moscow on a train, she meets the brave officer Alexei Krillovich Vronsky, who at the time appears to be on the fast track in his military career, at the train depot. It's Love at First Sight, though the fact that Anna is married — and cannot be granted a fair divorce in the Russian legal system — complicates matters significantly. Gradually, the pair sacrifices everything else they value for each other. Unfortunately, this is not a typical Western romance but a tragedy: giving everything up for love may not be worth it, as the reactions of friends and family show, especially when said love may be transient.

The other main thread revolves around Konstantin Dmitrievich Levin, who in contrast to most of the other characters lives on an estate out in the country rather than in Moscow or St. Petersburg. His country lifestyle (and overly romanticized appreciation for the peasants' ways) comes into conflict with the customs of high society in the cities, particularly in his stern but well-meaning outlook on life. At the story's start, he is seeking to be married to Ekaterina Alexandrovna "Kitty" Shtcherbatskaya, whom he has known for some time. However, he faces numerous issues of confidence, such as the fact that Kitty is also initially being courted by the very handsome and desirable Vronsky. Although Levin and Anna are both impulsive, Levin carefully considers his options, whereas Anna is unable to resist her desire for a better life.

Some chapters take the point of view of other characters, such as Levin's easygoing friend Stepan Arkadyevich "Stiva" Oblonsky (Anna's brother, who is entering a tough spot in his marriage due to infidelity) and Alexei Karenin (who becomes severely depressed when he learns of Anna's infidelity and finds it very difficult to decide whether or not he will officially divorce Anna). Levin's brother and half-brother, the destitute Nikolai Dmitrievich and the highly successful Sergius Ivanich, also play large roles in some chapters, particularly by interjecting philosophical viewpoints in various discussions (which, in some cases, are thoroughly mocked in the narration).

This book is a Russian classic and tends to be considered a timeless love story, though it also contains touches of satire of contemporary Russian society. The novel has been adapted into many versions for both theatrical film and TV, with actresses such as Greta Garbo (twice, in 1927 and in 1935), Vivien Leigh (1948), Nicola Pagett (1977), Jacqueline Bisset (1985), Sophie Marceau (1997) and Keira Knightley (2012) in the title role.

Entertainment Weekly ranked it the #1 novel ever written.