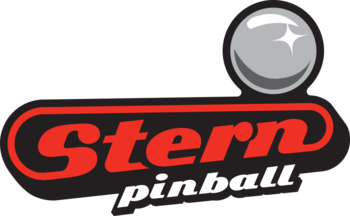 Stern is the name of two separate but related American companies known for manufacturing arcade Pinball and Video Game machines.

Stern Electronics was started when the Stern family, led by former Williams Electronics' president Sam Stern, bought and renamed the troubled Chicago Coin pinball company in 1977. Though overshadowed by competitors Williams Electronics and Bally/Midway, Stern was fairly successful in the pinball and jukebox industries.

When video games became popular in The '80s, Stern entered the field by licensing games from Konami and creating their own games. Their first in-house creation was Berzerk, an instant hit that grabbed players with its Machine Monotone voice. Stern's other video games (including Scramble, Pooyan, and Tutankham) were only moderately successful, however. Their pinball line fared no better, partially because Stern almost completely avoided licensed properties, unlike their competitors. In the wake of the The Great Video Game Crash of 1983, the company left the arcade industry in 1985, and the pinball assets were acquired by Data East.

Stern Pinball was started in 1999, during the implosion of the arcade pinball industry. Gary Stern, son of Sam Stern, was serving as the President of Sega Pinball when the company decided to close the division; he bought the assets and spun it off as Stern Pinball- somewhat bringing it full-circle, as Data East's pinball assets (the old Stern) had been bought by Sega. At the same time, WMS Industries closed its pinball division to focus on casino gambling; this effectively left Stern Pinball as the world's only major pinball manufacturer for over a decade, and many notable pinball creators started working for Stern as a result.

Today, Stern Pinball continues to thrive on a modest but steady market, producing around a dozen new Licensed Pinball Tables a year. While they sell well to bowling alleys and game centers, the majority of their pins are bought by individuals and collectors; Stern produces multiple limited versions of their games to cater to this crowd. Although they no longer have the market entirely to themselves, Stern Pinball is well positioned to remain the market leader for the foreseeable future.

Video games produced or distributed by Stern Electroncs include: