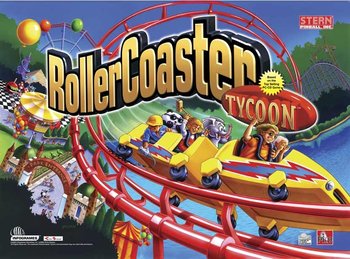 RollerCoaster Tycoon is a 2002 pinball machine released by Stern, designed by Pat Lawlor and based on the PC game that started the franchise. Themed around an amusement park, the game allows you to build rides and stalls, activate some of the game's modes, and accumulate enough guests to become a Park Tycoon. Notable features on this game include a talking dummy in the upper left corner of the playfield, as well as colored habitrails on the ramps to resemble roller coaster rides.

This game is considered to be mediocre by some fans because of the repetitive (and sometimes annoying) nature of the game and it's generally considered to be Lawlor's worst table. Part of this can be attributed to the recovery from the fall of Williams Electronics and Bally at the Turn of the Millennium. However, this game can still be enjoyed if you set your standards accordingly.