Characters / A Song of Ice and Fire - Queen's Men

This is a listing of Queen's Men in A Song of Ice and Fire.

For the main House Baratheon of Dragonstone entry, see here

The Queen's Men are the members of House Baratheon of Dragonstone that have converted to the faith of R'hllor. Their name comes from the fact that Selyse was among the first in court to convert and the most vocal supporter of Melisandre and the Red God.

"R'hllor has blessed me with that gift. Like Lady Melisandre, he shows me the future in the fire."

Brother of Alester, castellan of Dragonstone, uncle to Queen Selyse, and self-styled Hand of the Queen. Ser Axell is one of the most fervent followers of R'hllor.

Cousin of Lord Ralph Buckler. He is loyal to Stannis Baratheon and is one of the Queen's Men, having converted to the faith of R'hllor.

"He learned all he knows in the wynds of Flea Bottom. Were I to put you in his charge, he might strangle you with your own chain or scoop your eye out with a spoon."
—Stannis to Maester Tybald

A hedge knight from Flea Bottom, Suggs is a Queen's Man whose devotion is matched only by his cruelty. His personal coat-of-arms is a pig with wings.

"A man who bears Valyrian steel should use it for more than scratching his arse."

A knight of House Farring, Ser Godry is loyal to King Stannis Baratheon and is one of the Queen's Men. He is Ser Gilbert Farring's cousin. 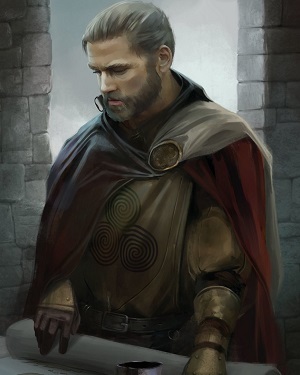 Feel free to perish as you wish, Humfrey. Myself, I would sooner live to see another spring.

A knight of House Massey in service to Stannis Baratheon. He is one of the Queen's Men, but is less devout and more reasonable than most.

"We have but one god here. Speak not of demons in this company. Only the Lord of Light can save us now."

One of Stannis Baratheon's most loyal knights and a Queen's Man. He is Stannis' second-in-command during the campaign in the North.

A knight in service to Stannis and a Queen's Man, serving as a bodyguard to Queen Selyse.

"No man has ever had cause to question my courage. No woman ever will."

A knight in service to Stannis and a Queen's Man, serving as a bodyguard to Queen Selyse. Gets himself torn to pieces by giants.

"The craven sees an outlaw behind every blade of grass."

Lord Sweet is the head of House Sweet and one of the Queen's Men.