Characters / A Song of Ice and Fire - Lord of Light

This is a listing of R'hllor, his religion, and and individuals associated with him, in A Song of Ice and Fire.

For the main Deities and Religions entry, see here

The Red God, Lord of Light, Heart of Fire, God of Flame and Shadow

He is also known as the "Lord of Light", "The Red God, "Heart of Fire" and the "God of Flame and Shadow". R'hllor is a popular deity in Essos, but relatively obscure in Westeros, with the notable exceptions of Stannis' court and the Brotherhood Without Banners. R'hllor is believed to be opposed by a deity known as The Great Other, who is the opposite of R'hllor in all respects. Ritual prayers include beseeching the Lord of Light to bring the dawn; the devout do this every night.

While R'hllor is introduced later in the series and seems like a foreign import in comparison to the Seven, it should be noted that every red priest or priestess depicted "on-screen" has been shown to work supernatural feats, something no septa or septon has been seen to equal. That being said, the Faith of the Seven is opposed to magic as a whole, so it isn't surprising they wouldn't try to use it. 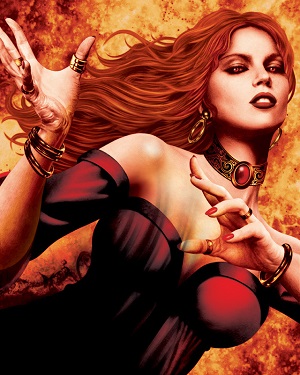 "R'hllor, give us light, for the night is dark and full of terrors."

A red-clad sorceress and Shadowbinder from the mysterious land of Asshai, Melisandre is an adviser to Stannis Baratheon and his wife. She is a priestess of R'hllor, the Lord of Light, and while various organizations claim (with varying degrees of probable truth) to use "spells", (such as the Faceless Men, pyromancers and certain armorers,) she is one of the few indisputably magical characters in the entire series, apart from other worshippers of R'hllor, and (depending on how you define "magic") the skinchangers like Bran, and greenseers like Jojen Reed. Melisandre preaches a message of tolerance and peace... by having people burned alive for the greater good. Her goal is to prepare the world for the War for the Dawn to save humanity from the threat of the Others.

Flame of Truth, Light of Wisdom, First Servant of the Lord of Light, Slave of R'hllor

Haldon Halfmaester has spoken of using the red priest to Young Griff's advantage, Tyrion recalled. Now that he had seen and heard the man himself, that struck him as a very bad idea. He hoped Griff had better sense. Some allies are more dangerous than enemies.
—Tyrion Lannister's thoughts

A High Priest of R'hllor, he resides at the Temple of the Lord of Light in Volantis.

"Your Drowned God is a demon, he is no more than a thrall of the Other, the dark god whose name must not be spoken."
—Moqorro to Victarion Greyjoy 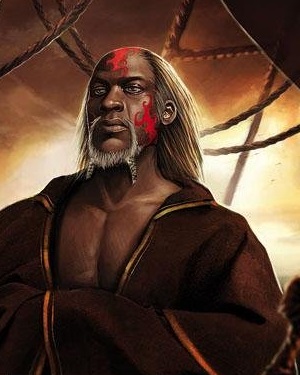 Another red priest in service to R'hllor, Moqorro was sent by the religion's High Priest to serve as an adviser to Daenerys Targaryen. However, his ship is wrecked by a storm and he was lost overboard. He is then rescued by Victarion Greyjoy and his crew.