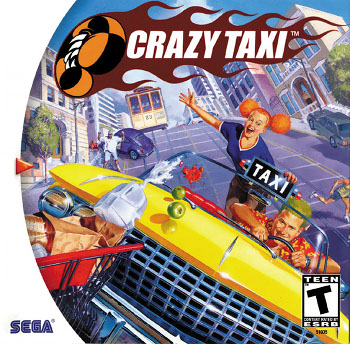 "Hey-hey, c'mon over, have some fun with Crazy Taxi!"
Advertisement:

Crazy Taxi was another of Sega's more bizarre concepts during The '90s that upon first glance honestly would make you think, "what the hell were they smoking?!", but once played, made you think, "I sure am glad they smoked that."

A 1999 arcade driving/racing game, ported to Sega Dreamcast in 2000, Nintendo GameCube and PlayStation 2 in 2001, PC in 2002, Game Boy Advance in 2003 (with the subtitle Catch a Ride), and iOS in 2012, the game focused upon four "extreme" independent cab drivers,note Axel, B.D. Joe, Gena, and Gus each with his or her own special car and attributes, who picked up random citizens of a city that bore more than a passing resemblance to San Francisco. Each of these lovely passengers wished to be driven to a destination within the city: a church, a baseball game, KFC and so on. Your job was to get them there ASAP, even if it meant essentially breaking all rules of the road, including driving off parking garages or even underwater. Your fare increased via tips when you performed tricks like Crazy Jumps or Crazy Drifts, and your passenger reacted in real time with excitement or disdain, depending on how you drove.

The game was also noted for its soundtrack, featuring punk bands The Offspring and Bad Religion. The original game has seen a number of ports over the years (following Sega's exit from the hardware market), from the Nintendo GameCube to the PlayStation 2 and even modern consoles/handhelds like the PSPnote Bundled with its sequel and called Fare Wars and digital storefronts like PlayStation Network.

Sega and Hitmaker went on to release a sequel in 2001, Crazy Taxi 2, exclusively on the Dreamcast and set on two New York-inspired maps with four new cabbies.note Slash, Iceman, Cinnamon, and Hot-D; the original cabbies are also unlockable It also introduced the "Crazy Hop", allowing the cab drivers to spring their cab's hydraulic pumps to vault the car over traffic and into shortcuts. The cab can now carry parties of two to four fares who all have unique destinations (this results in the benefit of tip multipliers for everyone currently in the cab and longer time extensions with bigger payouts but it's "all-or-nothing", meaning if you can't deliver the last passenger to their destination you don't make money from any of them).

The third and so far final game, Crazy Taxi 3: High Roller was released on the Xbox in 2002 (and later ported to the PC two years later). This time, rather than adding two entirely new maps, Sega opted to redesign two older maps ("West Coast", the original game's Arcade map and "Small Apple" from the sequel) and create a single new map ("Glitter Oasis", based on Las Vegas) to careen around. Again, featuring four new cab drivers (Angel, Bixbite, Mrs. Venus, and Zax; the other eight drivers from the previous two games are available on their respective maps and all twelve can be unlocked to drive on any map), the game sticks to the same basic formula as 2 and sets two of the maps (Small Apple and Glitter Oasis) at night, which is a first for the series.

In addition to the fare delivery main game, each game has its own minigame collection designed to test your driving skills in wacky, surreal challenges (such as using your car as a bowling ball to get a series of strikes against pins or trying to score a home run off a huge baseball).

A Free To Play sequel on Mobile Devices called Crazy Taxi: CityRu$h was announced on March 14th 2014. It removed most of the direct control from the player, instead opting to make it play like Temple Run. Early reception has been... less than positive, to say the least. Another mobile title, Crazy Taxi Gazillionaire (later renamed Tycoon for some reason) launched on January 5th 2017, which turned the gameplay into a Idle Game where you send your cabbies to pick up customers, rake up some dough to hire more cabbies and upgrade their skills for even more money.

Now with a Character sheet. Not to be confused with Odd Taxi.

Hey hey hey, it's time to make some crazy examples, are ya ready? HERE WE GO!